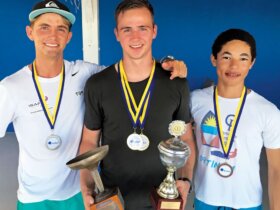 The Bequia Sailing Club’s 31st Bequia Easter Regatta came in for universal praise as a total of 42 yachts and 30 local double-enders registered to take part in this famous sporting and tourism event. Conditions were near perfect with light steady breezes and glorious sunshine.

The regatta was officiated for the thirteenth year running by Principal Race Officer James Benoit from Grenada, working along side the seven-person Bequia Sailing Club Race Committee. Two one-design Classes – one for the 25ft French ‘Surprise’ boats from Martinique, and the other for the popular J24 racing yachts – a Racing (spinnaker) Class and two Cruising Classes divided up the 42-boat fleet.

Ten yachts made the overnight journey from Martinique. They were joined by boats from the UK, USA, Netherlands, Austria, Trinidad, Grenada, Carriacou, St. Vincent, Bequia, St. Lucia, Barbados and Antigua.

Excitement ran at fever pitch on Friday for the inaugural First Citizens Big Boat Challenge, as the sleek new 28-footer Black Berry took part in her maiden race. Owned by the community of La Pompe, and built by a group of Bequia craftsmen led by boat-builder Jarson Hazell, Black Berry, skippered by Orson Ollivierre, drew huge crowds of onlookers wherever she raced. With ten entrants, the inaugural event was won by Skyler from Carriacou, skippered by Verrol Compton.

It wasn’t only competing boats that thronged the harbour in Admiralty Bay. An estimated one hundred additional power and sailing yachts came to Bequia to see the legendary local boat races, to follow the yacht races or simply enjoy being in Bequia at Easter. On Lay Day Sunday, regatta sponsors Bequia Beach Hotel hosted the Regatta’s Sandcastle and Crazy Craft race in Friendship Bay, followed by a delightful afternoon of live music and children’s entertainment in the hotel’s gardens by the beach.