The Cure for Baldness 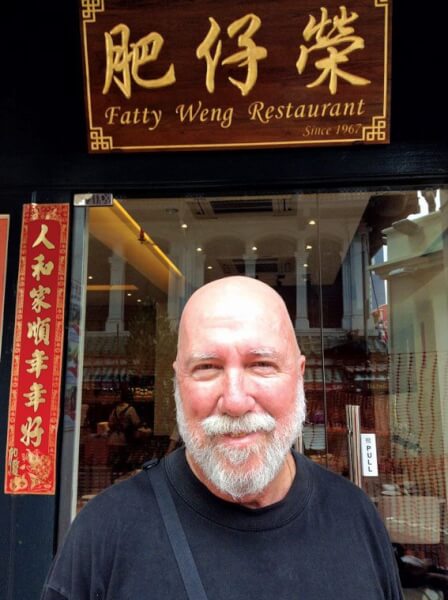 Hair is a very useful thing for a sailor to have. It helps to keep your head warm during winter gales. It also helps to keep your brain cool in the tropics. While it is true that I have very little brain left after living through the ‘60s—all the more reason to preserve the few cells still lurking about.

Yes, hair is useful. Many animals have it. And it ably serves an Able Seaman as a constant warning device to his fragile, egg-shell skull—screaming warning during, say, an unexpected jibe—just nano-seconds before you’re dead.

Strange women used to find it convenient to grab me by it—and smooch me up. No longer. I’ve shaved my head—which is a bit like yelling “I quit!” while getting fired. Actually, God removed my hair—and I pray He had His reasons.

… woe is the poor seaman who is follically challenged!

What have I ever done to deserve such a fate … other than bilking that starving widow out of her lifesavings; the impulse-shoving of that wobbly drunk, and all those cuckolded husbands …

Actually, I don’t think this line of reasoning has any merit—next question, please!

Thus, my 95-year old blind mother was a bit taken aback recently when I called her up (while at sea, phone-patched through my SSB) and yelled, “… [email protected]%#h!”

I know, I know, how crude and unfair.

My first thought while exploring my options was: transplant!

I raced to my doctor. He told me—after sadly glancing at my shiny head—that you ‘can’t transplant what isn’t there.’”

“What the hell does that mean,” I said, outraged. “I’m an American with money. You aren’t supposed to tell me “No!” Instead, you’re supposed to drain my bank account, then gently inform me … well, that you can’t help me without an additional 50,000 bucks … that’s the American way!”

“I’m sorry,” said the doctor, “but I can’t help you unless you’re willing to consider territory … well, further south.”

So there you have it—truly an awkward moment. As you consider, seriously consider, whether you want a head bristling with pubic hair.

I couldn’t help it. I cried. And screamed. And ranted. And said, “… I don’t want my pubic hair … well, public! Everyone calls me a dickhead already!”

Yes, going bald is ego-bruising. I am becoming a classic ‘baldy sour!’

Some ‘green’ oriented man claimed that his chrome-dome was a solar cell which powered his libido. Alas, the guy’s wife deflated this argument by asking, “What’s a libido … something to do with snoring?”

Humor is, alas, the only way to go. Crying and stamping your feet only works for so long. So I attempt to put my best, most comical foot forward by regularly saying, “I was so scared of losing my teeth—my hair fell out!”

Okay, not my best joke. But it’s good for a groan, which, in this case, is the most you can hope for.

Discouraged by my doctor, I went to a hair weaver whose sign read, ‘If you’ve got the money, we’ve the time’.

He was an Italian fellow with a huge, full, rich mane of silver hair combed in a wave about two meters above his head. During the entire interview, he kept staring at himself in mirror while combing his hair and making little kissing sounds towards his reflection.

“Were you a good squirrel?” he asked me.

“Did you save any nuts for winter?”

“It’s not those hairs I’m worried about,” I grimaced.

“Alas,” he sighed, “I’m a hair weaver, not a magician. Many of my customers begin, say, in middle age, to collect their, er, ‘future’ hair in shower drains, hatbands, and from combs. Thus, when they finally come into this office in hopes of using my professional services, they already have a few duffle bags of hair in readiness. Do you?”

“No,” I admitted. “I’m not that much of an advanced planner—and, besides, all my money goes into my boat, with a few pennies left over for the wifey, and nowhere aboard my modest vessel is there a place to stow a ton or two of once-proud-but-now-fallen-on-hard-times hair … which, truthfully, stinks to high heaven if it gets wet.”

“Well,” said the weaver, “in the interests of pure science and high profit, I’ll be happy to take a stab at weaving your nose-hairs, eyebrows, and beard into a flat, matted mess which can then be epoxied on top of your head … magic, eh!”

Hats are not the answer. Hats have to be removed—often amid a gaggle of giggles and snickers.

I mean, if you’re a sailor you do have to wear a hat—so you don’t burn the thin epidermis atop your skull and boil your brains within—but this serves only to further whiten/wrinkle/fold/wave/dent/bump, and deform your lily-white skull … did I mention the word ‘ego-bruising’ already?

Since I spend much of my life at sea, my body is tanned to a deep bronzed hue—and when I take my hat off … well, my unexpectedly revealed ‘cone-head’ looks like an ugly flesh-lump covered with confectionary sugar.

Those who manage not to gasp aloud usually do so by clamping a hand over their open, cringing mouth—a ‘dead give’ as we say in the Paranoids for Shiny Pates therapy groups.

The more ladies around, the worse it is. Whenever a lady comes into the room, I’m suppose to jump to my feet and doff my hat—and then pretend that I don’t see ‘em gasping for air, laughing, guffawing, bending over double in mirth, pointing at my head, and/or retching …

Of course, I only have to do this for ladies—so now when your average female enters my line of sight, I just loudly burst out, “… slut!” in hopes of avoiding any social problems. (So far, this is not working!)

I can’t do carpentry anymore—because I’ve discovered that having a ‘pencil behind your ear’ is hair-dependent, too.

Of course, the miser in me hoped that I’d save so much money on shampoo and conditioner that I’d become rich—ha!

Do you know how much shaving cream I go through in a week? How many razors? Band-aids? Antiseptic?

… do you know how much a transfusion costs?

I figure I lose about a pint of blood every time I shave my head—and if I don’t shave it, I looks even worse!

That’s totally true—everything fabric sticks to your head, like Velcro.

My wife can’t take a flash picture of me anymore. “Bounce-back,” she sneers.

Forget all those ‘miracle growth’ products: I’ve tried every type of ‘follicle fertilizer’ under my hat, all to no avail.

No longer can I instinctively sense the slightest wind shift while in the cockpit—not sans my 10,000 head receptors!

Even lice don’t want to hang out with me anymore!

The first thing I noticed was that it was taking longer and longer to wash my face in the morning.

Of course, there are advantages. For instance, my wife just attempted to be kind to me by saying, “Well, if we ever have to get in the life raft, we won’t lack for a signaling mirror!”

Editor’s note: Fatty and Carolyn are hatted … er, headed for New Caledonia next.