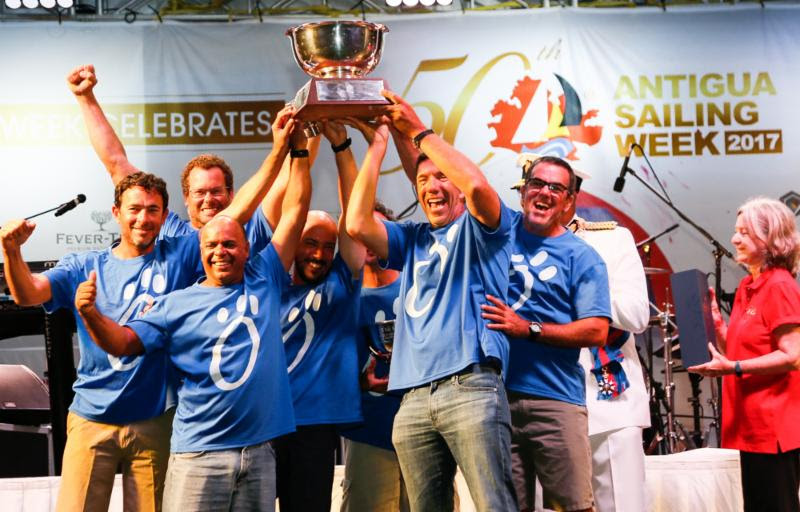 The tradewind fan was still on – set at medium-high – when the sailors at Les Voiles de St. Barth resumed racing today after Thursday’s layday. With an 18 knot east-southeast breeze, and a gentle swell, the Maxis were sent anti-clockwise from the starting line on a 32-nautical mile course which took them most of the way around the island before rounding the islet of Le Bouef and returning on a reciprocal course to the finish. The Racing, Racing Cruising, Classics and Multis classes sailed a shorter 21-nautical mile version of that course.

For some, yesterday’s bucolic layday meant a leisurely lunch at Nikki Beach, some radio-controlled boat racing and a dip in the turquoise waters. But for at least one or two teams the day was spent training in an effort to leave no stone unturned heading into the final two days of racing.

One of those was Vesper, the ‘new’ TP52 owned by Jim Swartz (Park City, Utah), which has Gavin Brady (NZL) calling tactics. Brady is one of the world’s leading match racers as well as a past America’s Cup helm and tactician. The Vesper crew, heavy with talent, includes Jamie Gale (Portland, Maine), Brett Jones, Ken Keefe and Chris Larson (Annapolis, Md.). While the team only started sailing Vesper in Florida last December, they have already won the International Rolex Regatta and St. Maarten Heineken Regatta even as they continue sorting the boat out.

“We had some gear failure on Tuesday,” said Brady. “We broke two jibs, so we ended up sailing half the race with just a mainsail. But we finished the race and that’s part of the challenge here, because the conditions are rough. You can break a lot of equipment and you have to get your boat to the finish line. It’s a good thing we did, because we still got a second place. All the other boats were having problems too. It [sailing here] reminds me a lot of racing in Hawaii – in the big waves and strong wind. But the water’s warm, and it’s fun.

“We’re having some close racing with another smaller boat in our class and it’s only coming down to a few minutes on corrected time. We went training on the lay day, so we’re taking the results seriously. We want to have a lot of fun in St. Barth, but we’re here to get a good result. We had a training session to get ready to step our game up, because we’re getting pushed very hard.”

One of the boats Brady referenced is Antilope the Grand Soleil 43 owned by Willem Wester (Breskens, The Netherlands). This is Antilope’s first season in the Caribbean, and Wester and his mostly amateur crew have been on a roll with wins in both St. Thomas and the BVIs, and a second in St. Maarten.

For the previous regattas Antilope had round-the-world racer Bouwe Bekking and Olympian Phillipe Begmans onboard, and may be suffering in Les Voiles de St Barth without them. “If you don’t miss someone like Bouwe, then something’s not right. He’s a great coach and tactician.” As to his role onboard Wester said, “I told someone I skipper the boat, and they said, ‘but what do you do?’ I do what skipper’s do bestâ€¦delegate! I can pack spinnakers and jump in where I’m needed.” And with Antilope placing second for the day, Wester concluded “there’s everything to sail for tomorrow.”

In actuality, it’s like six degrees of separation here in St Barth. Bouwe Bekking is, in fact, here. However, he is sailing on the Swan 112 Highland Breeze (NED), in the Maxi class. Bekking has five around the world races under his belt, most notably as skipper of the 2008/09 Volvo Ocean Race entry, Telefonica Blue, which finished third. Bekking said, “We’re sailing on the Gaastra boat, one of the event sponsors. They’re using it as well as a corporate event, so they’ve invited all their employees over here, so it’s a team building event for us as well. This is a fun week for me, of course it’s work, but the fun aspect is very important!”

In the Racing Cruising class, several skippers are on chartered boats for the regatta. Frans Vandyk (NED) is back for his second Les Voiles. This time around he and a group of friends were looking for a racing boat and had settled on a Santa Cruz 37 only to have the keel fall off. Undaunted, they chartered a Beneteau F50. “Black Hole seems really fast,” said Vandyk. “It did the 2008 Admiral’s Cup, so it’s really tuned up.”

Last year Vandyk lost out to Lost Horizon, the J/122 owned by James Dobbs (Antigua, W.I.). “He’s really quick, so we have to look at him, too. So our strategy today is as fast as we can push it. Have a good start is always important too, get away quickly, and get a good wind shift on the shore of the island.”

Vandyk was justified in keeping a wary eye on Dobbs, as Lost Horizon went on to “correct out” first today. The J/122 has been inching up the leader board all week, and today’s victory moved them up into second overall behind Nico Cortlever’s Nix, with Black Hole dropping to third.

In Classics, the 80′ Fife yawl Mariella, added another bullet to their string this week. Sailing onboard is navigator Henry Pepper (Marblehead, Mass). The spritely octogenarian will be 89 years old, and he takes his senior status in stride. Pepper, who also trims the mizzen, said, “I’m privileged just to be aboard. I love St. Barth, lots of nice girls and the driver is fantastic.” He continued, referencing owner/helmsman Carlo Falcone, “A lot of skippers have their big guns from prestigious boats, but Carlo likes to have people with no experience, and he teaches them, and it’s an adventure for him to see people learn.”

Jacques Vincent, Sojana
“Each day we discover something new with a different race course. Today we went around the island via the south coast and we encountered every point of sail and wind condition, which is always very interesting. Aboard Sojana, we went through all four headsails on board as well as our “mizzen spinnaker”, which is a rather unusual thing to see. We had a lot of sailing close to the wind. Sojana manages to build up a lot of power in these conditions and we completed the course in a little under three hoursâ€¦”

“This event is perfect for any of the race boats. You come down here and your guaranteed some big waves and some really exciting sailing so you really get to test the boat and equipment ad have some fast downwind sailing.

“Racing here is a new venue and when you’ve been in the sport for a long time, it’s fun to go to some different places and experience some different courses and wind shifts that are different. You can go to Newport in the sea breeze and you know you have to go left. This place we’re learning it, we’re starting to get a bit of local knowledge and build a bit of a playbook up on how to race in St Barth’s.

Social Scene ~
While St. Barth is an island whose natural beauty you can enjoy, the chic French isle is also where one can find the highest level of gastronomy in the Caribbean. Tonight in the Race Village, will be a special event showcasing three famous chefs, Laurent Cantineaux (Le Bonito in St. Barth), Yann Vinsot (HÃ´tel Saint Barth Ã®le de France) and Jean Luc Grabowski (President of the “GoÃ»t et saveurs” gastronomy club), for an evening dedicated to food tastings and culinary demonstrations.

St. Barth History ~
In 1784, the island of St. Barth became an exchange currency. Louis XVI decided to hand over what he owned in exchange for warehouse facilities in the port of Gothenburg, Sweden. King Gustave III of Sweden, who really admired French culture, took possession of the 21 square kilometers of land in the middle of the Atlantic, and the island’s fortunes changed for the good. The monarch did all he could to make the most of his purchase, beginning with setting up a free port and building up a town around the harbour. Between 1786 and 1787, the port changed its name from “Le CarÃ©nage” to Gustavia to pay homage to King Gustave III.

As a free port, St. Barth was a trade and supply center during the 18th century, beginning a mercantile tradition that has lasted to the present day. While Sweden sold the island back to France in 1878, its influence on the island is still seen through street names, the presence of Sweden’s national arms in the island’s coat of arms, and through the Karl and Oscar forts, two of the three castles built at the time.

Racing concludes tomorrow, Saturday with a first warning signal at 1100.

The awards ceremony will be at 6pm tomorrow, Saturday, April 9, followed by a cocktail party and fireworks on the Quai General de Gaulle.

RESULTS – For full results, go to event site at: http://bit.ly/fSHR6O