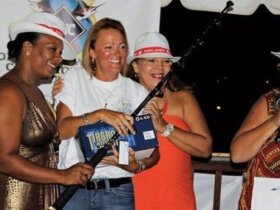 Knowing where to go and how to fish proved the secret to success for two teams at the Francis Nunes Jr. Memorial Tournament and Seafood Festival, hosted by the Antigua & Barbuda Sports Fishing Club in September. Sean MacMillan and his fellow fishermen aboard the 23ft Manta, Les Go, earned Champion Boat both overall and in the under 25ft category. What’s more, Greg Marcano and his two sons angling off Jason Belizaire’s 25ft Boston Whaler, Pazit II, took home four top angler prizes. It was definitely a day of not only fishing, but catching, especially for the Les Go and Pazit II teams.

“We started fishing the Nevis Bank, some call it the Barbuda Bank, over 50 miles northwest of English Harbour,” tells Les Go’s MacMillan. “We had our first wahoo onboard by 11am. Then, we left to go to fishing grounds called ‘The Ranch’. There, we caught a wahoo and a kingfish. Since much of the day we were out of radio range, we had no idea how close we were to winning until after we got back to the dock.”

Come weigh-in, Les Go beat Pazit II to Champion Boat by less than seven pounds with a total weight of fish caught of 119.8 versus 113.0lb, respectively. This marks the second time since the tournament started in 2009 that Les Go won, making them the only team in the event’s history to triumph twice.

“The secret to our success was the type of trolling we do; it’s high-speed. Only one other team, Pazit II, also high-speed trolls and we both did well in this tournament,” says MacMillan.

“We got our first strike within the first hour,” says the senior Marcano. “Jayden (10) jumped straight up, grabbed onto the reel and struggled, but managed to get his wahoo to the boat. He was so overjoyed. To see him catch a fish in his first tournament was a proud moment for me.”

This earned the ten-year-old fisherman the honor of Youngest Tournament Angler to catch a fish.

Next, 15-year-old Justin Marcano hooked up and reeled in a 39lb wahoo. It was a catch that landed him the Largest Fish by a Junior Angler and Largest Wahoo prizes. Then, it was Marcano senior’s turn. Usually the bait and gaff man, he instead grabbed the rod on the next strike and boated a 29.8lb wahoo, earning him Largest Fish for a (adult) Male Angler.

On shore, the competition continued at the Fisherman’s Cook-Off, a new addition to the tournament’s Seafood festival. Eight, four-person teams had 30 minutes to make a fire in a traditional clay coal-pot, while at the same time season and cook a portion of wahoo caught fresh that day. Needless to say, the fire-making efforts varied from team to team and provided the crowd with some great entertainment. In the end, the judges awarded the top culinary prize to Team Crab Hole Liquors.

“The Antigua & Barbuda Sports Fishing Club once again delivered a great event for both onlookers as well as anglers,” says organizer Robert Hall.