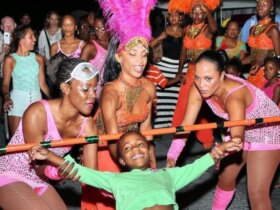 This year’s Trinidad & Tobago Tourism Development Corporation (TDC) Tarpon Thunder Tournament, which was held on August 14,15 and 16 at the Lure Restaurant and Bar, Sweet Water Marina in Chaguaramas, was for the first time a qualifying tournament for the International Game Fish Association (IGFA) Inshore World Championships (fly and light weight tackle tournament), hosted by the Florida Keys Outfitters.

The very successful tournament, which was competed by 109 anglers on 26 boats and had 162 Tarpons released, was won by angler Michael De Freitas on board the winning boat Mappapie. Michael was presented with his airline tickets and prize money from Chris Mouttet, President of the Trinidad and Tobago Game Fishing Association (TTGFA) and Richard De Verteuil, Chairman of the tournament and TTGFA Committee member at the Trinidad and Tobago Yacht Club on September 22, 2009.

Richard De Verteuil said he could think of no one more qualified to represent the country than Michael and that locals can follow the action, as daily coverage for the prestigious international tournament will appear on ESPNOutdoors.com and on IGFA.org, among others. Also, for the first time the IGFA Inshore World Championships (fly and light weight tackle tournament) will be partnering with ESPN Outdoors and its televised Saltwater Series, and will be presented on other ESPN Outdoors multimedia platforms.

TDC can look forward to having the Trinidad and Tobago Game Fishing Association assist in marketing the country as a key destination for Tarpon fishing in the years to come, as a video presentation is currently being prepared for use in the International Game Fishing Association (IGFA) Headquarters in Florida, USA. This video will expose the country’s fishing grounds to thousands of patrons that visit their headquarters monthly.