Anchoring is easy in big sandy bays, but areas with rolly anchorages, coral heads or strong currents require different anchoring tactics. Quite often the trickiest locations are the prettiest and well worth the effort. With the right equipment, and some practice handling second anchors or floats quickly, the job becomes routine.

A bridle for the anchor chain

We despise rolling, so spending a cyclone season in the Marquesas (French Polynesia) where most bays are open to the ocean swell gave us plenty of opportunity to experiment. With steady wind but swell from a different direction, a bridle is the easiest remedy to align the boat with the waves. We tie a second line to the chain, lead this line to a cleat amidships. Then we pay out more chain. Now it’s playtime: by adjusting the length of this bridle we can point the bow at different angles to the wind and better into the waves.

Zen and the Art of Anchoring…

A stern anchor in rolly or tight anchorages

In bays without steady winds a bridle does not work. It’s time to get out the stern anchor. We attempted deploying our anchors by dinghy, but soon got the hang of a much simpler system: First we drop our main anchor with the bow in the wind and set it. Then we align the boat with the swell, and while backing down, pay out double the necessary scope and simply drop the second anchor directly from the stern. Next, we pick up chain from the bow while paying out line over the stern until we are located between the two anchors. Luckily we have four bow rollers, so when leaving we let go the stern line with a buoy attached, haul up the main anchor, and then return to the buoy and lead second anchor over the free bow roller and to the windlass—a maneuver that’s much easier on the back than hauling up the anchor by hand while kneeling in the dinghy.

Will Your Anchor Hold? Basics of Anchoring Solved

A floated chain goes easy on coral and anchor gear 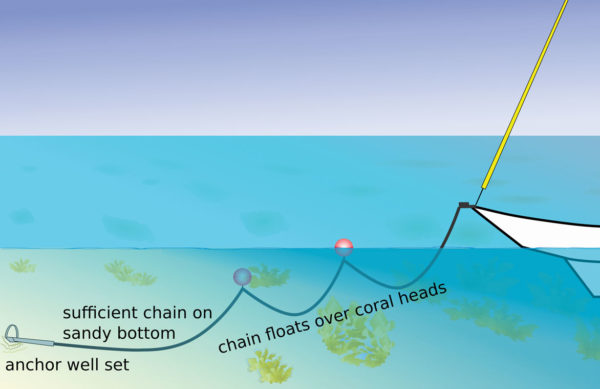 Climate change and a global rise in water temperatures is killing coral reefs on a large scale and unfortunately irresponsible cruisers add to the damage. In popular anchorages the damage caused by chains to these delicate structures is horrendous. People anchor blindly in bad visibility or in deep water and when the wind shifts the chain gets wrapped around a bommie (an outcrop of coral reef, often resembling a column, that is higher than the surrounding platform of reef and which may be partially exposed at low tide).

One Good Tern Deserves Another

When the wind picks up and they have to lift anchor in high waves the maneuvers can result in bent bow rollers and ruined or even ripped out windlasses. A ‘floated’ chain avoids such problems. First, we search for a sandy spot in shallow water where we can see the bottom and bommies are usually less numerous. We then drop the hook in the middle of that spot and pay out chain while looking around for coral heads within swinging distance (in case the wind shifts). Before the chain can touch any coral heads in the vicinity we attach a float (a buoy or a medium-sized fender) to the chain using a carabiner snap hook and then run out more chain, adding another float if necessary, until we have the right scope. Of course it’s true that floats partly nullify the weight advantage of the chain, so it is important to have as much scope as possible before hooking on the first fender and to properly set the anchor. As long as it’s calm the chain hangs in loops between the floats and remains clear of the coral heads. When the wind picks up, the chain stretches out as it usually would and the floats are submerged.

Anchoring Tactics: Bahamian Mooring is a great in tight spots or strong currents

A floated chain can be risky in areas with wind against current, where the chain could get fouled with the floats or even wrapped around the keel. In such conditions, or when there is not enough swinging room, we build a ‘Bahamian mooring’. The first part of the maneuver is the same as with a stern anchor (set main anchor, fall back, drop second anchor from the stern, pull forward), but instead of attaching the second line to the stern it is led to the bow and tied to the chain of the main anchor under tension (best with a sacrificial line). Both are then lowered below keel depth and the bow can point into the wind (or the current). The whole system should be so tight that both chains and the boat remain almost stationary. Even when the wind shifts the pulling direction on the chain does not change much and the anchors do not need to reset.

Careful What You Wear at Night on Charter

A reliable, firmly set anchor gives the crew the peace of mind to sleep undisturbed through squally nights and to enjoy activities ashore without an urge to constantly watch out to check whether the boat’s still there. Searching for the right spot and fiddling with additional equipment may take a little more time, but what are a few minutes compared to the safety of the boat and the wellbeing of the crew?

Birgit Hackl, Christian Feldbauer and ship’s cat Leeloo have been anchoring their way from the Mediterranean via the Caribbean to the South Pacific. Check out their blog on www.pitufa.at