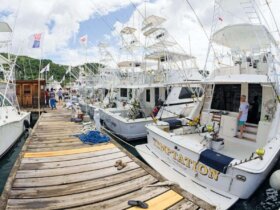 She thought her line had snagged on a rock since it proved difficult to reel in at first. Yet, St. Thomas angler Claire Anaclerio, who competed in the Virgin Islands Game Fishing Club’s 2019 Wahoo Windup Tournament on Saturday November 9, thought that couldn’t be correct. Anaclerio and her fellow anglers fishing aboard the Calypso-built Double Header 38 were high-speed trolling south of the U.S. Virgin Island of St. John, where the South Drop can reach depths up to 12,000 feet. In reality, she hooked into a whopper wahoo and it was this 35.0-pounder that earned Anaclerio the tournament’s Top Angler prize.

“It was about 30 seconds after lines went in the water that I hooked up the fish,” says Anaclerio, who competes in most of the Virgin Islands Game Fishing Club’s tournaments and confides this catch was on a pink and blue lure. “The fight ended up being only about 5 minutes, but at first when the line didn’t budge I was for sure it must be stuck on a rock.”

Anaclerio’s catch was 40-plus pounds shy of the $10,000 prize offered for the tournament angler who caught the largest wahoo over 75-pounds.

“We had two goals for this tournament,” says Gypsea King angler, Jared Buckstein. “To win and to catch the most fish to do so. The second we caught that first fish, I knew it would lead to victory.”

The 9-boat tournament fleet with 40 anglers landed a total of 385-pounds of wahoo.

“We had a great tournament,” says Kelvin Bailey, Jr., Virgin Islands Game Fishing Club president. “Looking ahead, the Club looks forward to community outreach during the holiday season and an invigorated tournament schedule for 2020.”

Cash prizes and carved wood plaques made by My Brother’s Workshop were presented
at an Awards Dinner at the VIGFC, in Red Hook, held Tuesday night. The dinner entrée was wahoo, donated by several of the participating tournament boats.