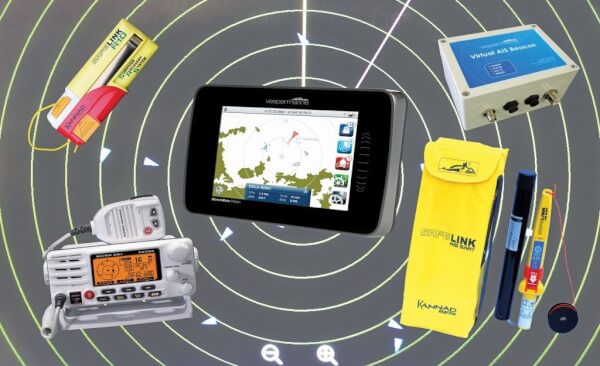 AIS, or the Automatic Identification System, was originally developed to aid in the safe navigation and collision avoidance of large vessels entering and exiting busy waterways and ports. Today it has morphed into a plethora of affordable electronic products and gadgets that will help anybody on the water have better situational awareness and avoid collisions. This technology allows boaters to identify and view vessels in near proximity to them and safely and seamlessly determine who they are and in what direction they are traveling. As any boater knows this can prove to be a great help in busy waters, night or day, in good weather and bad.

Originally mandated in 2002 as an International Convention of Safety Of Life At Sea (SOLAS) requirement, vessels of 300 gross tons or more had to be equipped with a Class A AIS system. These systems comprise a transceiver, antenna, GPS, integrated display, 12W transmit power, able to interface with other onboard equipment and have a transmit rate of every few seconds. The AIS information is transmitted and received through two dedicated VHF frequencies at rates from two to ten seconds depending on vessel speed and contains extensive data such as: Maritime Mobile Service Identity (MMSI) number, navigation status, rate of turn, the latitude and longitude, course over ground, true heading, true bearing and abbreviated time the data was generated. It also will display over longer six minute intervals data that is more useful to port authorities and marine traffic regulators such as: IMO ships number, radio call sign, vessel name and type, dimensions, draught, destination and ETA to destination. All this information is useful to have whether you are a maritime controller for a port authority, a captain of a freighter entering a busy shipping lane or a cruiser trying to stay out of the path of a much larger vessel. This system proved to be extremely valuable in collision avoidance, coastal security, accident investigations, and as a navigation aid.

For those cruisers or recreational boaters looking to avoid collisions while in heavily traveled waters there is a more inexpensive alternative to Class A AIS that is exploding in popularity. It is the Class B AIS. It can come in many forms and is a scaled-down version of the Class A units. There are full-featured Class B transceivers such as Vesper Marine’s (www.vespermarine.com) Watchmate series that have integrated displays and install easily on smaller vessels either by splitting into existing VHF antennas or using a dedicated antenna. They feature built-in GPS antennas and stand-alone capability or can be hooked to an external GPS and interfaced with existing displays and equipment. Other advantages to these less expensive yet feature rich AIS units is low power consumption (2-3 watts), alarms (including an anchor alarm), information filtering and multiple profiles. Some of Vesper’s units even have touch screen displays and Wi-Fi capability so you can view the information on your tablet or smartphone. 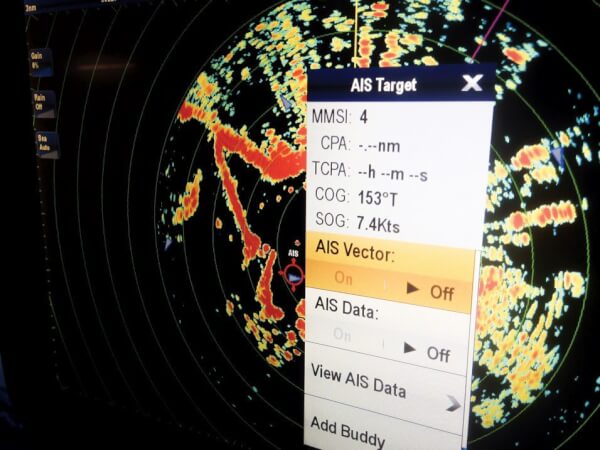 Information provided by Class B units is slightly more limited than their Class A big brothers. Data includes vessel’s MMSI number, speed over ground, course over ground, latitude and longitude and true heading. Transmission is at a lower 2 watts and transmit rates can be up to every 30 seconds. These systems are designed not to step on the transmissions of Class A units and to broadcast in between Class A transmissions.

Another fast-growing segment of the AIS boon is the receiver only segment. These units are capable of receiving AIS signals but have no way to transmit one’s own vessel information. These are proving very popular with smaller craft and those not requiring all the features of a full Class B unit. One example of such a unit is the Standard Matrix VHF with integrated AIS. This VHF radio takes advantage of its receiver and monitors the two frequencies utilized by AIS. It has the capability of displaying the Class B information on its display screen. When connected to a GPS it even has the capability of displaying AIS targets. The screen is small and the information is limited but this unit provides valuable information in a small and inexpensive package. Other receivers can be interfaced with existing multi-function displays. The small ‘black box’ units can be tied into existing navigation systems and can display the pertinent information on chart plotter and radar screens. Small stand-alone displays are also available that will also interface but give redundancy to vital collision avoidance information.

AIS has also developed in other ways and has allowed for some interesting and useful applications such as AIS-SART, a Search And Rescue Transponder that utilizes AIS data to help in the fast recovery of a life raft or vessel in distress. Transmitting the AIS data and a distress signal, vessels monitoring the AIS frequencies will have data shown in their displays, easily identifying and locating the vessel in distress. There are also the new personal AIS such as Kannad’s SafeLink R10 man overboard AIS. This compact unit that can attach to a life vest can be manually activated and will transmit an AIS signal to all vessels monitoring AIS within a few miles radius. An AIS SART icon will appear on their screen with GPS coordinates of the MOB, allowing for fast recovery.

AIS is also being developed to create virtual beacons and boundaries. Jeff Robbins of Vesper Marine described an AIS beacon the company set up in New Zealand. He explained that there was a particular submerged rock that threatened vessels entering a cove on the rugged coast of New Zealand’s South Island. Buoys had marked the rock but were constantly drifting off station or being lost due to heavy seas and rough conditions. Vesper was called in and created a self-maintaining and autonomous beacon on one of the nearby cliff tops that transmits the virtual buoy information to all vessels within range, marking the rock with a virtual beacon to all vessels with AIS. Vesper was also responsible for setting the virtual marks and boundaries at the recent America’s Cup in San Francisco utilizing its AIS technology. With government funding diminishing for maintenance of actual buoys and markers it is very possible that in the not too distant future many buoys will be replaced with virtual counterparts.

New to the world of AIS is the recently developing AIS Class E. This is a cellular-based AIS system that relies on cellular signals and is designed to be used by smaller vessels that can monitor AIS data on their cell phones. Smart Chart AIS has developed an android app that will display the AIS data on free NOAA charts on your cell phone screen and can even display the virtual information through the camera view on the phone. While not yet available for Apple devices and limited to cellular signals, this new class of AIS is in its infancy and will be worth watching for smaller vessels that never venture far from shore (and stay within cell range).

The simple fact is that AIS, in all its forms, is a useful and life-saving technology that not only helps the maritime world function more smoothly but can also give the cruiser or small boat owner peace of mind, bringing life and property saving technology to all boaters. The future of AIS will only bring more innovation and better, safer boating.

Glenn Hayeshttp://www.HayesStudios.com
Glenn Hayes is a writer and photographer based out of west central Florida and has marine industry background spanning almost a quarter century. He can be reached through his web site www.HayesStudios.
RELATED ARTICLES
Cruise