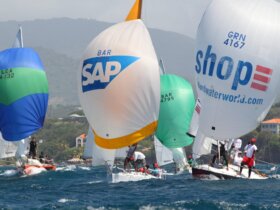 This month is a crucial one for French sailor Jean Allaire. In the coming weeks, the St Martin-based sail maker will find out if his bid to compete in the 2006 Route du Rhum will go ahead or not.

Since May 2003, Allaire has been trying to gather backers and whip up support for a St Martin entry into the famous Transatlantic race from St Malo to Pointe a Pitre, held every four years. Should he succeed, Allaire’s would by no means be the first Caribbean entry – Guadeloupe’s Claude Thelier and Claude Bistoquet have both competed in previous years, but it would certainly be the most ambitious.

First, Allaire needs to secure the use of 60ft Rexona Men for the race, the top-end Trimaran that won the race in 1994 and 1998 as Laurent Bourgnon’sPrimagaz. The boat is currently in the North Sea and is being held for Allaire until this month. To buy her will cost 740,000 Euros, no small feat in itself. Even more surprising is the fact that Allaire, who will rename the boat Ile de Saint Martin, will be 60 years old in 2006.

“In all honesty, I’d have preferred to do it at 30 years old, but the way life turned out I either didn’t have the money or the desire to do it then,” Allaire told All At Sea, from his sail loft, Delta Voiles, that he runs in Saint Martin.

Allaire’s project has been met with considerable skepticism. “There are a lot of people who think I won’t get the money together,” he admits. But settling for a smaller, cheaper boat is not an option. “You have to recognize that the cameras only follow the big boats. When you see the reports, you only see the 60 footers,” he says. The 2006 race will be the 25th anniversary edition, meaning that, “it’s a good thing for the island to participate with lots of parties, lots of spectators, and lots of journalists.”

Using Rexona Men, the only 60ft tri capable of entering the lagoon, as a promotional tool, the plan is to bring the boat to St Maarten in time for December’s Charter Exhibition. This is to be followed by a few months with her on display, then race her in the 25th St Maarten Heineken Regatta in May, where Allaire’s priority is to bring the Round the Island record (currently held by Playstation) home.

He points to the progress the Dutch Side has made in turning sailing into a source of revenue for the island, and thinks it’s time for the French side to catch up. “We’re never going to have a car factory come here and employ 10,000 people, so we need to get round a project that can motivate people to turn their minds to the sea,” he comments. “Everything we’re doing here needs to come back to the marine industry in general.”

The Association Ile de St Martin aims to raise the money through loans, sponsorship and also selling products such as specially branded wine. The search for funds, he says, represents about 90 per cent of the whole project. The 15-day slog across the Atlantic will almost be the easy part, for a man who recently won the Multihull division of the Course de l’Alliance and once managed the world’s largest trimaran, 85’ Axial.

Despite the critics, there is still some high-profile support. “When I called [2002 Route du Rhum winner] Michel Desjoyeaux, who I’ve known since he was little, to tell him I was taking part, he said, “I knew it. I knew you would.”’

Most touching of all for Allaire was, “an old man, 91 years old, who’d done a lot of sailing on the traditional boats, who said to me, “I want to see this boat before I die. I’ll wait to get on it and after that…” He’s waiting for that. That moved me a lot.”