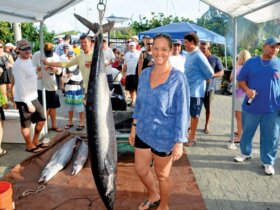 Deep sea fishing will always struggle to be
a spectator sport, but even diehard fans will have been looking at their
waterproof watches during June’s St Martin Billfish Tournament.

“Mediocre,” is how tournament President Francois Anton described the fishing.
“The best yet,” might be the analysis of the region’s Blue Marlin community,
whose members were conspicuously unwilling to spend the second week of June
being photographed upside down on the Marigot waterfront.

With 29 boats coming from as far as Florida and Trinidad to take part,
expectations were high for an event that has a 781-pount Marlin as its record
catch, regularly delivers excellent sport, and offers generous prize money,
cars, and entertainment.

But the passing of a Tropical Wave, regular downpours (the first rain in
eight years for the tournament), and controversial timing meant that just two
Marlin were landed over the four days of fishing.

These deep sea fishing folk are an upbeat lot, however, and it takes
more than drizzle and static lines to get them down. The good humour throughout
the tournament was infectious, and those that did were glad they made the
journey. Trinidad’s Zorro won the
Motor World Trophy – a Daihatsu Charade – for a 475-pound Marlin they caught
fifteen minutes into the first day. The boat also won the Texaco prize for
travelling the furthest to be there.

First prize overall went to Martinique’s Limited Edition, who hooked 5,000 Euro for their five releases. They
also snatched a 135-pound tuna. Captained by Yves Pelisson, this was the crew’s
third appearance in St Martin.

My Way from Key West was the only other
boat to land a qualifying Marlin (over 300 pounds), although Oli T lost one estimated at 600lbs after
a two-hour fight. A respectable 29 releases were recorded under 300 pounds.

Anton, who will pass on the presidency for next year’s tournament, was
sanguine about the week’s haul. “Many Caribbean tournaments would love to have
three marlin in two days,” he said, adding that there had been a lot of bites.
During the year, sports fishermen were still catching big Marlin around St
Martin, so there was no cause for alarm yet. But Anton recognised a big
decrease in the number of fish in the last ten years, singling out the big
Japanese and Korean fishing trawlers anchored off Pointe Blanche.

For this year, though, consensus was that the cooler sea temperature had
driven the larger fish away from the surface and that not holding the
tournament during the Full Moon had been another contributing factor.

Next year, two of the days’ departures will be from Grande Case rather
than Marigot. Dates are yet to be announced, but the decision this year to
extent to four days’ fishing was popular, as is the lay day which was hosted
this year by Friars Bay Beach Café.