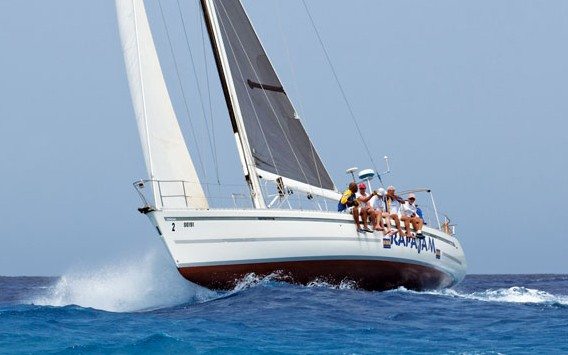 WOW!
What a weekend – what we didn’t have in wind we certainly made up for in
camaraderie. The highly successful 8th "Dark & Stormy" Anegada Race was held March 11 – 14th
in the British Virgin Islands. This year, 28 cruiser/racers competed in one of
the most fun races of the year. Sponsored by Mt. Gay Rum & Roadtown
Wholesale, this weekend regatta is hosted by Neptune’s Treasure (Anegada), The
Loose Mongoose (East End, Tortola) and The Jolly Roger (West End, Tortola).
Smith’s Ferry and a St Thomas ferry brought up people swelling the attendance
to 400 +.

The regatta began with registration and a
BBQ at The Loose Mongoose on Friday, March 11th, with skippers
receiving instructions for some 60 miles of racing. Saturday morning was the
start outside of Trellis Bay, Tortola. The Committee Boat, a Bavaria 53, headed
up the Race Committee of Mike Kirk (Race Captain), Di Kirk and Peter Ratcliff.
The regatta was held in two formats – a general race from Tortola to Anegada on
Saturday the 12th and a pursuit format from Anegada to the Jolly
Roger, home of the West End Yacht Club who runs the regatta, on Monday the 14th
(Commonwealth Day in the BVI). Mitzi McLean did a great job as the land coordinator
and had all events down like clockwork.

The only thing needed was more wind. The
weather on Saturday was 11 knots out of the east but the race back to the JR
was cancelled late in the day due to absence of wind.

After feasting on complementary fish
appetizers and a BBQ, the Soares Family, owners of Neptune’s Treasure, went all
out to present a great lay day on Sunday. Contests were held in dinghy racing,
horseshoes and sandcastles with skippers and crews having the options to
participate or hit the beautiful beaches of Anegada for the day. Regardless of
the choice, all enjoyed a delicious dinner upon their return. Mark and Dean
Soares are one of the major suppliers of fish to the BVI so fresh seafood was
abundant all weekend. Foxy provided calypso with the Lounge Lizards stroking
out favorites and other tunes of infamy on Sunday evening.

Marty Halpern, an originator of the
regatta, was emcee for the Awards Ceremony at the Jolly Roger while Mitzi gave
out prizes to each entered yacht on Monday night the 13th. Well over
40 horseshoe players arrived at Anegada in a chartered boat from St. Thomas for
the famed Inter-Island Horseshoe Championships on Sunday afternoon. All in all,
it was a great weekend and we all agreed, “This is what living in the Caribbean
is all about!”