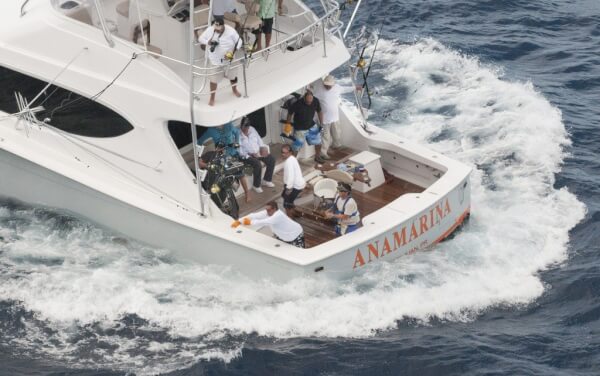 Red hot is the best way to describe the first day of fishing in Club Nautico de San Juan’s 60th International Billfish Tournament (IBT). The fleet of 48 boats, with over 175 anglers representing 9 countries, released 48 blue marlin. What’s more, this Diamond Jubilee year focuses on competition and conservation by awarding more points for releases on 30-pound test and continuing partnership with National Geographic Society to deploy Crittercams, water-and pressure-proof systems that include recording equipment, to capture images of blue marlin in their natural environment, footage that will be used to create a documentary on this magnificent billfish.

“We likely broke records today for the amount of fish released in one day in our tournament,” says Club Nautico de San Juan’s commodore, Gustavo Hermida, who fished aboard his 77’ Hatteras, Fish Hunter.

In boat standings, Acapella is in first place with 785 points, followed by Bolita and Batichica in second and third, respectively, each with 690 points. The release of a blue marlin on 30-pound test earns anglers 325 points each while a blue released on 50-pound test counts for 230 points. Thirteen boats have two or more releases!

Hermida’s Fish Hunter is one of the seven boats to release two blue marlin.

“We had our first bite around Noon, but it pulled the hook,” Hermida explains. “Mid-afternoon, another fish came up on my line and I was able to release it. I released a second blue marlin less than an hour before lines out.”

Hermida caught and released his two blues on 50-pound test. However, given his marlin were in the 100 to 150 pound range, he may choose to fish with 30-pound test tomorrow. Teams must declare each morning whether they will fish with 30- or 50-pound test line. The trend towards smaller blue marlin this time of year, the desire to attract international light tackle anglers, and strong commitment towards conservation led the organizing committee to encourage the use of 30-pound line test.

Even anglers that didn’t release any blue marlin were excited by what they saw today.

“I’ve been fishing this tournament for over a decade and I’ve never seen so many blue marlin in one day,” explains Leo Ortiz, from Miami, FL, who fished on the Viking 56, Reel Affair.

“It started out slow for us in the morning and early afternoon. Then between 3 and 4:30 p.m., when we were 5 to 6 miles off El Morro, we hooked four blue marlin and lost them. I’d have to say the new technology really helped us to find the fish.”

Use of new satellite programs and ‘Google Earth’ has allowed organizers to show tournament anglers this year where the potential fishing ‘hot spots’ are located, as well as to give a clue to bites per day and per hour with a high degree of accuracy.

Up for grabs is a Smart Car – courtesy of Garaje Isle Verde – which will be awarded to the first boat to release eight blue marlin. This car is likely to drive away given the red hot fishing today.

“We had an excellent start and hope for more of the same,” says tournament chair, Miguel Donato.

The second day of tournament fishing takes place Wednesday and fishing concludes on Saturday. More than 30 prizes will be handed out at the Gala Awards Ceremony. 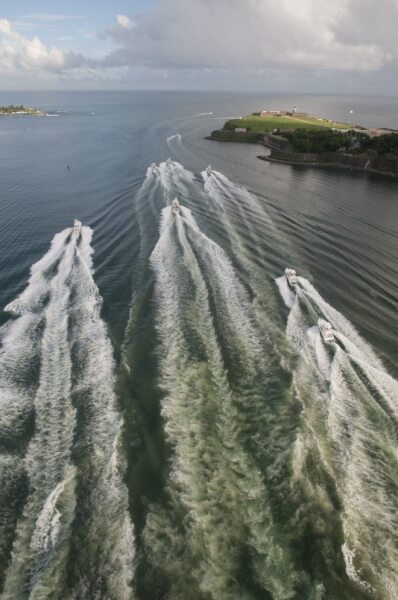