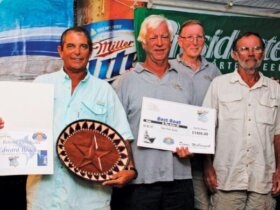 Over 180 registered anglers took to the docks to compete in
some of the hottest fishing action in the USVI. Held annually on the 4th of July, the “onshore”
fishing tournament put on by the VI Game Fishing Club is hosted by Offshore
Marine in Subbase.

The Tournament Director, Harald Tapp, was proud of the
turnout making it one of the largest fishing events of the season in terms of
anglers.The competition was fierce as
the multitude of anglers battled wits in order to compete for the main prizes
within their division.Proving that the
apple does not fall far from the tree, Clyde Tapp, the Tournament Director’s
son, drove home in his brand new vehicle won at the event – a bicycle!

You have to bring your “A” game of fishing to this
tournament as there are a lot of toys, underwater adventures and hotel
accommodations on the line for the tournament winner. With this event, however, everyone is a winner and no one leaves
empty handed with a prize in hand and memories to keep them counting the days
until next year’s event.

The competition was tightest within the 3 – 6 year old
category with a tight finish between second and third. It ran down to the wire before everyone lost
their focus for other priorities – juggling unicyclists and fire trucks!

If you want to compete against the best of the best, start
practicing now and put it on your calendar for next year!