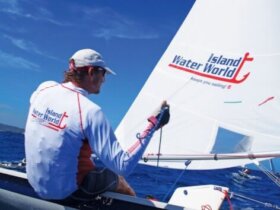 Days prior to the 29th running of Bequia's Easter Regatta, the Admiralty Bay anchorage began to swell dangerously. Race boats blew in from over a dozen countries, some bringing mother ships bearing supplies along with full-on fan clubs. Cruising boats, bareboats and spectating vessels squeezed into every available watery hole; high speed taxis ferried passengers helter skelter; and local boats delivered fuel, laundry, bread and lobster as a hive of inflatable dinghies buzzed the bay. Just when it seemed there was no more room at the inn, several base-booming ferries pulled in bearing hordes of gyrating visitors.

Ironically the real party started on April Fool's Day with a skippers' briefing amidst tents of free-flowing beverages supplied by the red hat rum runners, Mt. Gay. Captains and crew of a record 86 registered boats fueled up for four days of seriously fun competition organized by the Bequia Sailing Club.

Day one on the course, Good Friday, was just that. Winds were light but never gave up, allowing each boat to fly a full wardrobe of sails. The first leg, upwind of the line, was a bit of an obstacle course with a ship and one mega yacht anchored in the way, but the extra tacking added drama along with a couple of minor collisions and a handful of near misses.

The J-24 Class rounded the mark in a cluster, popping chutes like a blossoming field of flowers. Sixteen entrants sailed hard to win the Bequia crown but also to grab top honors for the first sanctioned J-24 Southern Caribbean Championship.

Another one-design class was the 25-foot French Surprise boats that made the long trip from Martinique onboard ships. Their sponsor-emblazoned hulls colored the course and supplied plenty of reading material for nearby boats.

The second day of competition turned into a bumper-car ride with fading and fluky winds. The downwind mark near West Cay turned into a parking lot with plenty of high spirited road rage filling the air, but luckily, no one felt the need to use their horn.

Easter Sunday, termed Lay Day, was jam packed with one event after another. The Heineken Round the Island Race set off from Admiralty Bay, while in Friendship Bay, contestants and the curious filled the beach for the start of the fishing boat race. Busy sculptors took part in the Sand Castle Contest followed by a Crazy Craft Competition with four inventive, enthusiastic vessels that somehow sailed down the beach before losing all their bits.

For the final day of racing the weather blew in with true Caribbean conditions, perfect for the Admiralty Bay triangle course. Fishing boats had an added leg taking them out and around the south end of the island.

Each day's race was followed by an awards ceremony, but the finale held at the Gingerbread Hotel was the biggest and best. Nicola Redway, chief organizer of the perfectly-orchestrated regatta, emceed the presentation of prizes that included fishing gear, anchors, tool boxes, VHF radios, GPS units and other coveted boat gear. In an over-the-top effort to please, the committee keeps track of who gets what so that winners will receive a new thrill each year.

Former Prime Minister, the Honorable James Mitchell took the stage, joking to the revved-up crowd, "I regret and take responsibility for the lack of wind on the first two days. We're glad, though, that you got to see the blooming yellow pouie." Laughing, he continued, "I'm sorry there was a little crash of the yachts here and there. Sometimes that's needed to get them out of your way."

For many, the Bequia Easter Regatta was an inaugural event, but for one sailor it was the last, the retirement race of a legendary, lifetime career. Trinidad's Rawle Barrow drove his Beneteau 38, Petit Careme, to one first after another, netting him the overall win in the Cruising Class I. As he took the stage to collect a beautiful Bequia model boat, the crowd cheered for the man who in earlier days was an Olympic sailor.

More full and half models were placed into proud hands until the ceremony came to a propitious end as the sky opened up with much needed rain, sending everyone for cover. Participants would soon sail away, taking with them unforgettable memories and the words of Mr. Mitchell … "You're always welcome here on this beautiful rock called Bequia."