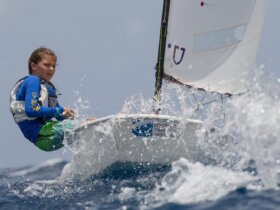 In 1983 Sunfish sailors in Curacao gathered for a race that received the name of one of Curacao’s tourism pioneers and Sunfish representative: Rudy Dovale. Now almost 25 years later the race has become and is still the standard event for many local Sunfish sailors to test and prove their tactic skills. And skilled Sunfish sailors obviously live in Curacao!  Names such as Cor van Aanholt, Wim and his son Hans van der Gulik, Dolf van der Giessen, Niek Kort, Alex Roose, and René and son Bruce Brandt are well known in the international world of Sunfish sailing for many years!

Every year they all gather for the local Sunfish championships during two weekends in August, but the traditional Rudy Dovale race is a special meeting of the giants; youngsters and veterans, complemented by new local talents and sailors, temporarily living on the island. Second price winner Jurgen Schneider seems to be one of the latter. Schneider arrived on the island some ten months ago, but used to live in Curacao before. In fact, in the year 1983 he participated in the Sunfish Worlds as a Netherlands Antilles citizen, reaching as far as the 8th position. Now that he’s back, he immediately leaves his mark in the local sunfish section by taking the lead in a race as important as Rudy Dovale’s.

Taking the lead means in Curacao be the best behind… Cor van Aanholt.
Van Aanholt is becoming a kind of legend in Curaçao already. When he participates in a sunfish race, there is only an aim left for a second place for the others. So it went in this year’s race, which was been sailed on March 25th, in the middle of the windy six weeks preceding Easter, locally called “Kuaresma time.”

Some nineteen sailors came to the start in the A class, eight participated in the Youth-Double.  The races are sailed in two courses in Spanish Waters, each for about two hours, rounding seven buoys over a total distance of about 16 NM.  And surprise, surprise! After a competitive start—van Aanholt in front of course—Wim van de Gulik, Bruce Brandt and Jurgen Schneider managed to pass the champ in the upwind track and round the Barbara buoy first. But the lead was short-lived. On the down wind track, van Aanholt’s specialty, he took back the lead and kept it for the rest of the day.

That didn’t make the race less tense. The pursuit of the second place was eventually achieved by Schneider, and Niek Kort completed the top three in both races and overall.

The youth sailors brought quite a spectacle on the water, with daring maneuvers and, of course, some dips in the water. One of those duckings dramatically occurred just a few seconds away from the first start. After putting their boat upright again, Just and Deion lost their grip on it and their Sunfish fierily went off without a human hand to steer it. Winds of about 18 knots rapidly pushed the boat westwards. Fortunately, a following motor boat stopped it on its spooky adventure and let the youngsters catch up in the race.

In the second race, Deion and Just did better and finished second in the youth-double, making it to a third place overall. Ard and Eugene gained top honors in their class, Alexandra and Jarrick got second.

This year all participants received a nice Sunfish shirt from name giver and sponsor Rudy Dovale. What the first prize for the 25th edition will be is still the talk of the town!

Canfield, and the Stars+Stripes America’s Cup team he founded with Mike Buckley a few years back, will join the New York Yacht Club’s campaign for the 37th America’s Cup