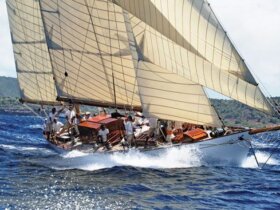 The fifth edition of the Aruba International Regatta drew competitors from Bonaire, Curaçao, Sint Maarten and Aruba to the new regatta location in Oranjestad. With 50 sails on the water and some 100 participants, this regatta is proving that Aruba has a growing and healthy sailing scene.

Weather conditions were perfect for close competition during the 52 races held in Oranjestad harbor, the island’s capital.

This year, the annual Budget Marine Cup was not awarded to a single boat or competitor but to the Foundation Youth Sailing Aruba, a sailing school dedicated to teaching the 7 – 14 year olds’ about the safety and fun of sailing. The award was given in recognition of their efforts to promote safe sailing in Aruba.

Fierce competition amongst the yachts saw Dash, from Curaçao, skippered by Remco van Dortmondt, hold on to last year’s title as fastest yacht in the fleet. He was followed by Nawati from Bonaire skippered by Werner Haan. These two managed to outwit the Aruban yacht La D’ing and the local knowledge of Captain Henk Werner who had to settle for third place. The new windward/leeward courses, designed by race director Anthony Hagedoorn, ensured fast tactical races.

The sunfish class was won by the Aruban Champion Richard van der Wal, followed by Ton Nuijten from Bonaire and Robbie Ferron from St. Maarten.

In the windsurfing classes, Jean Paul da Silva, a promising windsurfer from Curaçao, won both the downwind slalom and the long distance in the Junior division. Ethan Westera from Aruba did the same in the Super Junior division.

Race director Anthony Hagedoorn overcame initial doubts about the regatta’s new location and after careful study decided it was in fact the perfect venue. In an exchange of emails with regatta founder Eric Mijts, Hagedoorn said the feedback was nothing short of amazing and that Robbie Ferron, from Budget Marine, mentioned that the organization was of very high caliber and he could not remember the last time he had so much fun in a regatta. “Coming from him [Mr. Ferron], it says a lot to me and is something we can both be very proud of,” Hagedoorn said.

The 2014 Aruba International Regatta will take place August 8, 9 and 10. For more details, photos and full results, visit: www.aruba-regatta.com or find them on Facebook.