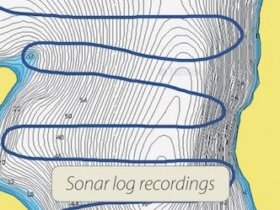 Here we are at Easter time and it’s high season in the islands. In the BVI there are upwards of six cruise ships in the harbor at Road Town on any given day. With an average of 2,000 people disgorging from one ship, on six-cruise-ship days 12,000 people are swamping the island—and the place teeters under the weight.

After all, it’s an additional roughly-half the normal population straining the already barely adequate infrastructure. Town becomes one big traffic snarl up. Beaches become so crowded as to resemble a zoo, with oddly shaped people in various stages of undress completely boggling the mind. Thus it is that these folk have the collective sobriquet, “sheeple.”  Derogatory perhaps, because it describes people who trust to others’ imagination and follow the leader: the cruise ship tour organizer.

Many sheeple choose to go on a day outing on a “cattlemaran” (catamaran?) to a local place of interest only accessible by water…(sheep become cattle for the day! They must like being treated as a herd.)

When sheeple are on board ship they become piglies because they are fed from morning, noon, till night. One cruise line offers: early morning tea, breakfast, mid-morning coffee, lunch, afternoon tea, high tea, dinner, evening supper and a midnight buffet: that’s nine meals a day. Oddly shaped people? Yes it’s a fact, and not surprising. Girls who should be pretty young things become ‘dogs.’ Guys, after too much imbibing, become ‘animals’ and well…obese adults become ‘elephants.’

At the zoo there’s an entrance charge – you visit the exhibits – at the end of the day the stalls are cleaned out and the animals are fed.  At a visit to Tortola, ships’ passengers are charged a ‘landing tax,’ they visit local attractions, sewage and trash are removed, ships are watered.  Without a doubt there is a similarity – and because of the gate fee, the phenomenon will continue.  It’s part of island life!