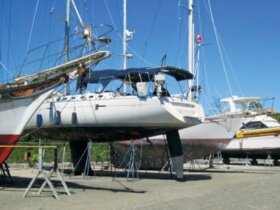 Captain, sailor, scribe, producer, director, artist, construction queen, and professional medium are just a few of Cheryl Dubois’ claims to fame—so far. And though this multi-faceted woman is indeed a Jacqueline of all trades and master of many, it’s been her adventures on the waves that charted her true course toward self-discovery.

Born in Richmond, Virginia, Cheryl spent summers on the Tappahannock River. But it wasn’t until her older brother Roy bought a Catalina 27′ centerboarder during her first year of college that she really earned her sea legs.

“We learned by bouncing off sandbars on the Piankitank River and Chesapeake Bay,” says Dubois. “I’m tiny, and Roy is nine years older, but I was determined not to let him outdo me. Sibling love and rivalry fueled me to learn the ropes!”

After graduating from Virginia Commonwealth University and studying painting, printmaking, photography, and world religion, Cheryl decided to follow her sailing passion. Her scariest nautical memory developed while delivering her newly-purchased trimaran from Virginia to Florida with several guys. “We hit a storm around Hatteras and Frying Pan shoals. Luckily, I had bought two car flares from 7-11 as there was no safety equipment on board. When the Coast Guard finally found us we were almost shipwrecked. Those flares saved our lives! That was the only time I was ever seasick and I swore that night I’d never sail again.”

But she did. In fact, she says, in 1979 she became the second female ever to get a USCG Captain’s license on the East coast.  (They had to change the “he” to a “she” on the certificate.) Cheryl started her own Florida charter company. While delivering a boat to Aruba, fate stopped her in St. Maarten where she met sailing soul mate John Westmoreland and ended up staying.

Together they chartered a 50′ Spronk cat, Ikhaya, out of La Samanna resort. Though they did some “cattlemaraning” as she calls it, La Samanna was a huge celebrity magnet. The Rolling Stones, Jackie Onassis, Paul Newman, Robert De Niro, John Lennon, and Daryl Hannah were just a few of their famous clients. Cheryl’s favorite was “Little Joe’.

“Michael Landon was amazing—down to earth and funny. He told stories about how he fed himself when he was a struggling actor by calling food companies and saying he’d found things in their products so they would send him cases of free food.”

Other favorite moments included the connection to the universe she felt watching double moonbows and the green flash—and having dolphins swim so close she could touch them. Most impressive was the celestial cinema of the sea sky at night.  “I doubt anyone could sail under those stars and not feel they were part of a much bigger plan,” she says.

One of her most embarrassing moments came when she docked the boat in St. Barth the first time without John.  Forgetting that he had rigged the gearshift backwards, she earned the moniker “Captain Crunch” from her peers by taking a big chunk out of the dock. Fortunately, another captain’s bigger faux pas a few days later eclipsed her klutzdom.

For five years Cheryl sailed most of the island chain. But life in the Caribbean of the 1980s had its own lessons to be learned—most of them the hard way—and she eventually quit career sailing. The unkindest cut of all was when her beloved Ikhaya was tossed on to Simpson Bay during Hurricane Luis in 1986 after she had returned to Florida. Cheryl recounts, “I truly felt like I had lost my child.”

Once gone, Cheryl’s life lessons in the Caribbean haunted her and she felt driven to chronicle them. She worked for Robert Redford at the Sundance Festival in Utah for three years and, hooked on the movie industry, decided to move to Los Angeles to launch a new career. Her sailing days eventually spawned the fiction novel “West of the Equator—In Search of Paradise,” soon to be a major motion picture shot in the Caribbean. Cheryl hopes that her tale’s theme of following your true calling, even as a “little lady” in a man’s world, will inspire other women to take the helm of their own journeys at sea… and in life.

Susan Campbell is a freelance travel writer specializing in the Caribbean and Canada.