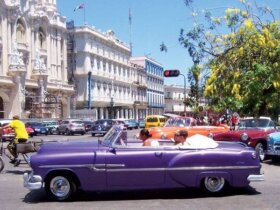 Cuba … That Was Then, This is Now

A lot of potential cruisers—men, mostly—are interested in enticing their spouses offshore. Here’s how.

#1) Bribes: Yes, diamonds work well. But bribing your spouse need not be expensive. For instance, I save all my Popsicle and ice cream sticks for my wife to use when she does my epoxy work… and she seems genuinely impressed with my thoughtfulness and husbandly consideration.

It isn’t the amount on the price tag, it’s the thought which counts. Example: instead of buying her expensive ‘deck mops’ or yacht scrubbers, I just cut old manila hawsers into chick-sized chunks, scribble her name in magic marker on a strand… oh, man-o-man, she practically wears the foredeck’s gelcoat away when I give her a new one!

Incidentally, it is nice to personalize some of these gifts… but it is best not to get too specific. For instance, a ‘First Mate’ coffee mug or a ‘Bodacious Babe’ embroidered bikini will look just as nice with the next wife as it does with this one. (Bottom line: think ahead, sailor!)

#2) Gifts are a bit more subtle than bribes: I mean, “Ten bucks for a half-and-half,” isn’t considered exactly romantic by the fairer sex. Thus I make sure to ‘ruffle it up’ with gay wrapping and ‘sensitive man’ candlelight… whenever I ‘gift’ my wife on her birthday with a pair of welding gloves, knees pad or some new grinding disks.

#3) Dinner Out Ashore! This ALWAYS turns on my wife… so I make a point of inviting her ashore for dinner at least once a year! Of course, you have to ‘steel yourself’ to tell a few white lies… unless you are an ethnic-type sailor… in which case you might prefer brown, black or yellow lies… anyway, the Big Night Out is always fun… if you avoid a few simple mistakes. For instance, your wife will smear herself with make-up, douse herself in perfume… why, my wife broke three combs just attempting to untangle her hair! Regardless of how ridiculous she looks tottering down the gangplank in her duct-taped high heels… tell her she is beautiful, stunning, captivating, etc. Don’t worry, it is impossible to lay it on too thick… no matter how lavish the praise, she’ll find your comments stingy.

One more thing: beware the posterior! That’s right, woman are ass-adverse! Butts can only be described as ‘itty-bitty’ or ‘slender’ or ‘tight’… why, you can descriptively go all the way to pedophile and not worry!

If she’s an experienced cruising wife she’ll bring a large open-at-the-top duffle bag purse… to catch any left-over or ‘extra’ food which might ‘fall off the table’ if you catch my meaning. She might not remember what the menu is for… or might begin to eat by shoving her face into the plate… or she might yell graphic “Barnacle-Bill-the-Sailor” obscenities throughout the meal.

If you’re surrounded by other yachties at the restaurant, this won’t be a problem… they’ll have to good sense to ignore her ‘offshore’ table manners. However, if you’re seated amid landlubbers… watch out, a few of them may vomit.

It is best not to take too big of a risk on the actual restaurant itself—I prefer Mickey D’s whaleburger with extra ketchup… if you desire a specific recommendation.

#4) Out for Drinks! This is similar to eating ashore except you might do it far, far more often… say, every month or so if your spouse is an alkie.

The important thing during these candy-is-dandy, but liquor-is-quicker ‘booze foreplay’ shore excursions is to demonstrate the depth of your love…. real, genuine, caring love… for her… for her mind… her body… and, yes, even her liver!

Don’t let her drink too much! When she glances away, take a large gulp from her glass! When she goes to the ‘little girl’s room’ polish off her drink… and accuse her of being forgetful when she returns suspicious.

If she tries to order a third drink, cut her off. Yes, apply tough-love… and she’ll adore you for it. However, don’t be TOO mean. Example: I allow her… for the next four or five hours… to idly play with the melting ice in my discarded drinks… and to lick my sizzle stick or chew my lime rinds… who says I ain’t nice?

#5) Movies Out! This isn’t so bad… if you tell her straight off, ‘no popcorn!’ My three favorites: Titanic, Jaws and The Perfect Storm.

#7) Girl Time! Yes, it important that females have a chance to bond too. Group activities are best: filleting fish and learning the complete song lyrics to ‘Frig’n in the Rigging’ are good female-friendly tasks to start with.

#8) Praise & Flattery: the two cornerstones of every watery relationship. Like my father once told me, “Son, always praise people. Ninety-nine percent won’t realize you’re doing it and the other one percent will appreciate it!” Wise counsel, eh?

This is dead-easy, once you get the hang of it. Just blurt it out, don’t worry about how it sounds. “I like the way your breasts swayed while you were cutting up that octopus for bait,” is fine. So is, “I liked the way your hair looked during the dismasting.” Don’t worry if it sounds odd to a male ear, it will sound smooth as honey to a female one. “The way the mud squishes between your toes in the shipyard… pure sex!” or “Your braided nose hairs… and those damp dreds under your arms… Richter Scale wow!” or even, “I love your cedar bucket sounds!”

If your spouse has a fat lip or a black eye, compliment the other.
See how simple it is?

#9) Sex: Yes, sex itself is a powerful motivator. For instance, my spouse knows that if we pitch-pole… we’ll have sex immediately afterwards if we’re alive. This gives her sometime to focus on other than fear. Ditto, severe gales. I mean, I think of our hard-used Paratech sea anchor and our new Jordan series drogue as… well, ‘time-out adult toys’ if you get my drift… or, hopefully, lack thereof.

#10) Flowers: I don’t know why, but even hardened sailor-girls are crazy for flowers. This is why sex is so casual in the tropics: flowers are easy to steal. But that’s not true in more northern climes. And modern florists are expense! However, here’s a money-saving tip: florist trash bins are seldom locked and ‘dumpster diving’ is a required skill for a frugal circumnavigator-on-a-budget.

True, some women are a bit put off by wilted and/or almost-dead flowers… but, hey, if it is in the latter part of a romantic relationship… what could be more appropriate?

Of course, we’ve been primarily focusing on the fairer sex. This is not only sexist, it is unfair. Many men don’t go to sea… because of… er, ‘performance’ problems.

“This is ironic,” one sad cruising wife told me, “especially since he’s surrounded by all those other erections: like his main mast, his mizzen mast… his stout spinnaker pole… his rigid inflatable… her hard dodger… his autopilot ram… his bow-thruster… grim reminders never end, eh?”

#1) Don’t be too spatially accurate. Even the smallest cucumber is six inches and can get you into a pickle!

#2) Praise his Macho-ness. If your wheelchair-bound husband uses his cane to press the button of your electric Barients… just say, “Oh, baby… you sheet hard, honey!”

#3) Never forget the exterior play area of your vessel was not named after a rooster… no matter what your mother told you.

#4) Going ashore for dinner or drinks… Hooters is always a safe choice.

If the old duffer’s wife is there, just signal your intentions by asking stuff like, “…did the same surgeon who did your eyes do your tummy tuck? Thigh lippo? Nose job?”

This should endear her to you.

#6) In Mixed Company: Obviously, you’ll be spending a lot of time with other sailing couples should you marry a rich-yachtie-about-to-croak… so always put a positive spin on things. Or, to put it another way, the more active your Romeo is, the sooner he won’t be. Thus, if the subject of, say, multiple orgasms come up… just gush air-headedly, “…well, I don’t know how to count that high, sugar!” or “He don’t need no Viagra… hell, once I had to shoot him with an elephant tranquilizer gun!”  Or, if your husband is from the same country Rocky Balboa is, “…that Italian Stallion stuff ain’t no lie!”

Or, “Our boat don’t just rock, she Tsunamis!”

Or, “Thank God for the extra carbon fiber that Swan put into the master stateroom’s bunk support brace!”

#7) Continuing Education: Yes, it can be fun for sailormen and sailorwomen to stay active during their sunshine years—and nothing is better for an active lifestyle than learning. Thus, entice your skipper with a How to Drink Beer instructional video. If he isn’t interested in learning but you’d still like to continue your education alone, why not a night course in Preparing Snacks for your Football Watching & TV-adled Husband!

Yes, cruising together towards the Pearly Gates can be fun… especially for fun-crazed, sun-dazed, geriatric sea-gypsies!

Editor’s note: Cap’n Fatty and crew are currently yapping at each other in Yap, Micronesia.