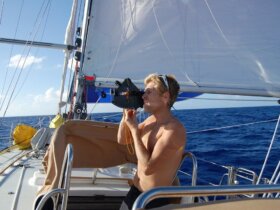 The Importance of Celestial Navigation

Passage planning with our two year old daughter:  “We’re here, in South Africa, Chloe. We’re going here,” jabbing mid-ocean with a finger, “to St Helena, then Brazil, then aaallll the way up to the Caribbean, here. It’s a long way.”

On the 16th February we sailed out of Hout Bay on our 31 ft Muira, the boat laden down with provisions and spares. On board were myself and Captain Pete, six month old Jago, our daughter Chloe, and Tom, an old college friend who had—bravely or foolishly!—volunteered to join us for the crossing. It was a joy to finally be underway as possibly the worst part of the voyage was pre-departure anxiety about embarking on a long trip with two small children.

Within a couple of days we had all settled into that easy routine of a long passage at sea. Chloe had found her sea legs and adjusted to the shock of her whole world lurching around as she tried to traverse the small saloon. Jago was proving that babies are easier to sail with when they are still fairly immobile and have not yet developed lemming-like instincts!

We were lucky with the weather and for the first few days the winds were mostly southerly, Force 4-5, so enough to get Tandika creaming along without being uncomfortable. Tom and Pete threw themselves into the task of fishing with great zeal and limited success:

In fair weather, a considerable part of ocean sailing revolves around keeping entertained. By the 22nd Feb we had crossed the halfway mark to St Helena, 850 miles in our wake and the conditions had eased to ESE Force 3 with a long lazy swell. Our faithful spinnaker, purchased for a whole $20 USD in Durban, finally blew out so we set about setting every spare scrap of sail. We hanked on both headsails, the No.1 poled out, full main and the storm jib slung off the backstay—and filling! Not content with this, Pete and Tom hauled out all the sleeping bags to try and squeeze an extra &frac14; knot!

Ten days out and the weather changed again, bringing a succession of very localized squalls. The boys kept themselves happily entertained on watch by “squall surfing” – adjusting course to try and get the perfect angle on the approaching squall to get the maximum speed out of the boat whilst exerting the minimum effort changing sails!

Around midday on the 29th we caught our first glimpse of St Helena. This gem of the South Atlantic would be incentive enough to repeat the trip again… and again! It stands out, not only in altitude (rising 2,700 feet straight out of the sea) but by inaccessibility.

The proposed airstrip is, as yet, unfinished so the island remains unscathed by the great global tourist movement. Every visitor who passes through has made some considerable effort to get there, while the inhabitants lead a life untouched by consumerism and massive media hype. Even with the advent of the airport it remains to be seen how this will affect the island, as the practical logistics of such an operation are astonishing. The maximum sized runway could only accommodate a plane seating 150; of these, 100 would have to be jettisoned to allow for extra fuel capacity. Arriving on the island feels like a walk back in time. Long may it keep its innocence!

We arrived just after nightfall in Jamestown. The famous Jacob’s Ladder, a flight of steps stretching the full 600 feet to the west side of the town, is fully illuminated at night and is a great navigational aid! The steps were built in 1829 and originally used for hauling goods and manure. Now they just serve for fitness fanatics and masochists but for anyone hearty enough to make the ascent, the view from the top is truly spectacular.

Again, we were fortunate with the weather. For a few weeks in every season there are such large rollers coming into the bay it is impossible to make a landing. We were there in fairly calm conditions but getting ashore was exciting enough. As the surge rises against the stone quay, you have to make an agile leap for one of the ropes hanging from a metal frame and swing yourself ashore, Tarzan style. On the next surge you collect one child, then the next, before depositing them somewhere safe and going back to help haul out the dinghy. (For getting back to the boat simply reverse this process.)

Bleak and dramatic as Jamestown was, we were completely unprepared for the lush, semi-tropical heart of the island, giving way to pastures and coffee plantations as we toured in a beaten up old truck. Though relatively small (47sq miles), St Helena has a fascinating history (the only graffiti I saw read, “Napoleon woz ere, 1815”), immense character, and as a bonus, giant tortoises.

On the evening of the 9th March we were ready to set sail. The RMS St Helena was due in the day after our departure so the shops were fairly bereft of supplies. We took on fresh water, said our farewells, and set off, Pete and Tom lamenting the lack of a windlass in 65 feet of water. As we left the lee of the island the wind picked up to a Force 4, ESE. We were under way again.

Fishing now a taboo subject. Chloe has taken to singing, “PeteTomNIL!” at odd moments. PeteTom not amused. Planning to cut our losses next time and stock up on tinned smoked oysters.