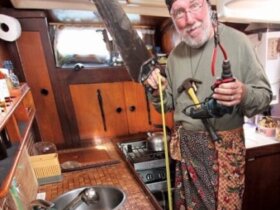 A Perfect Galley — A Perfect Idiot

When a vessel is in distress, the faster that search and rescue authorities can be alerted the quicker that a coordinated search and rescue operation can begin. That premise was the impetus behind the International Maritime Organization’s call for the development of a Global Maritime Distress and Safety System (GMDSS) in 1979. This system was fully implemented twenty years later, and today GMDSS is an integral part of safety at sea for both commercial ships and recreational yachts.

What Exactly is the Global Maritime Distress and Safety System (GMDSS)?

GMDSS allows the mariner to use an amalgam of communications equipment, that rely on both satellite signals and radio frequencies, to give the best chance of alerting authorities in the event of a life threatening situation.

“The Global Maritime Distress and Safety System is not really a communication system,” notes maritime technical author Tim Bartlett, “it’s a legal framework of equipment requirements and operating procedures, involving several different communications systems.” As such, it encompasses a wide range of technologies, some old and some new, which give independent means of transmitting distress alerts.

Navigational Telex is an automatic receive-only text message system for navigational, meteorological and piracy warnings, as well as ice reports and active search and rescue information. Using 1950s technology, NAVTEX receivers are a pre-tuned single sideband (SSB) radio. It was developed to provide a low-cost, simple and automated means of receiving maritime safety information on board ships at sea in coastal waters. Shore based NAVTEX transmitters are designed to have a maximum range of 400 nautical miles.

The satellites and earth stations of COSPAS-SARSAT, the joint venture in search and rescue by the United States, Soviet Union and Canada, allowed the Emergency Position Indicating Radio Beacon to become the cornerstone of GMDSS in 1984. Prior to the development of GPS chips, a first generation EPIRB relied on a combination of low polar orbiting satellites, high orbit geosynchronous satellites and Doppler positioning techniques to aid in locating a stricken vessel. Today, a GPS enabled EPIRB will alert rescue services within three minutes and transmit a position with an accuracy of about 150 feet.

Patents for a Search And Rescue Transponder were first granted in the early 1990s and they were radar-based systems. When a SART is turned on aboard a boat in distress it will be activated by any X-band radar transmitted from a nearby vessel. This radar frequency is the most common band used aboard recreational vessels and ships. As the radar transmitter sweeps its pulse across the SART, it triggers the SART to transmit a series of twelve equally spaced dots that appear on the search vessels radar screen. As the search vessel steers toward the dots on the radar display and closes in for rescue the dots turn into arcs, and finally into full circles when within one nautical mile of the SART. Since 2010, an AIS-SART has proven to be a more accurate alternative to the radar SART. The AIS-SART contains a GPS receiver that is used to derive a standard AIS (Automatic Identification System) position. This in turn is transmitted by the SART to nearby search and rescue vessels over two VHF radio frequencies.

Since 1999, Digital Selective Calling is a technology that has been applied across all classes of maritime radio systems, whether they are medium frequency (MF), high frequency (HF) or the type used most often by recreational boaters, very high frequency (VHF). DSC was developed to replace the slower voice Mayday call with a rapid predefined distress message, including GPS latitude and longitude, initiated by the push of a button. If time permits, the nature of the distress can be selected from an on-screen menu choosing from abandoning ship, fire or explosion, flooding, collision, grounding, listing, sinking, disabled and adrift, piracy or attack and man overboard.

It was just over 100 years ago that the Marconi radio operator aboard the Titanic relayed that disaster to all ships at sea using a Morse code telegraph signal. Although ships at sea now use an EPIRB to shorten the time needed to begin the search after similar occurrences, vessels must still have all necessary resources on hand for prolonging survival at sea until the rescue is made.