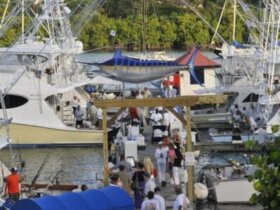 St. Thomas, U.S. Virgin Islands (December 9, 2012). The USAâ€™s Sally Barkow played the â€˜comeback kidâ€™ by defeating the USAâ€™s Dave Perry 3-0 in the Finals at the 5th Carlos Aguilar Match Race (CAMR), presented by Ulysse Nardin/Trident Jewels & Time. Barkow, who has raced this regatta four times, took second last year after a narrow defeat by Finlandâ€™s Staphan Lindberg. The sorrow of that defeat made this yearâ€™s win for Barkow and her crew â€“ Annie Lush, Alana Oâ€™Reilly, Erik Champaign and Maggie Shea â€“ all the sweeter.

â€œWe worked hard as a team in these last few days and it paid off,â€ says Barkow, who is ranked 6th in the Womenâ€™s and 31st in the Open match race rankingâ€™s divisions as of December 5, 2012. Barkow was awarded a distinctive Ulysse Nardin precision timepiece for her win.

A rain squall blowing across the Charlotte Amalie harbor just minutes before the start of the Finals left light and shifty conditions in its wake. This didnâ€™t deter Barkow who handily won the first two matches against Perry.

In what proved the final match of the Finals, Barkow lead at the start and stretched her advantage to 8 boat lengths by the windward mark. She lengthened her frontrunner position into a commanding 10 to 12 boat lengths by the finish even though her team battled through a kink in the spinnaker that cost them a few seconds in boat speed in the last downwind run.

â€œIt was so shifty,â€ says Barkow. â€œIt was easy to get it either so right or so wrong.â€

This match-up of teams in the Finals was an interesting one as Perry, who is the author of Understanding the Racing Rules of Sailing 2009-2012, has served as Barkowâ€™s match racing coach.

â€œFor me it was a win-win,â€ says Perry of his teamâ€™s second place finish and his studentâ€™s first. â€œSallyâ€™s team is really good and they have evolved their game well. I was impatient. I had some advantages and gave them away. This either put me behind or put me further behind and Sally took advantage of that.â€

This four-day Grade 2 match race was sailed in Inter-Club (IC)-24s. Forty-nine flights or 135 races were sailed in total.

Race results and copyright-free downloadable images by Virgin Islands-based photographer, Dean Barnes, are available for editorial use on the official event website (www.carlosmatchrace.com).

Trident Jewels & Time is a family business started by Peter and Nina Alwani in 1980 in St. Thomas, U.S. Virgin Islands. Since then their two children, Satish and Girish Alwani, have established the company as the store of two sensations: jewelry and watches. Trident has one store in St. Thomas (Main Street) and three branches in Aruba (Little Europe and Times Square). Trident carries all varieties of jewels including loose diamonds, sapphires, emeralds and tanzanite. The company is also the exclusive authorized retailer for a selection of some of the most exquisite timepieces in the world: Ulysse Nardin, Harry Winston, Franck Muller, Oris, Hamilton, Michael Kors, Alpina, Frederique Constant, Bovet, Jaquet Droz, Bell & Ross, U-Boat and Graham.