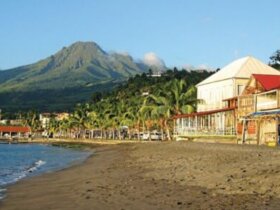 Top Ten Anchorages in the Caribbean

A large gathering of members, supporters and sailors came together for the official Dock Opening & Fundraising Event at the Sint Maarten Yacht Club in late April. After months of rebuilding, the Club invited the community of St. Maarten to come and witness the progress that was made at the Club since hurricane Irma. The event combined a fundraising and sailing event to generate awareness for the youth sailing program and around US$5800 was raised for the Club’s rebuilding efforts and sailing school.

The day started off with a sailing event showcasing 36 competitors in five different classes. Winds were strong but they didn’t deter the youngest sailor, nine year-old Caii Banting, who left a memorable impression by winning the Optimist class. Racing finished at the rebuilt dock where people were awaiting the sailors and cheered them on as they came in.

The event concluded with a raffle for which the Club received many donations from restaurants, hotels, businesses and individuals.