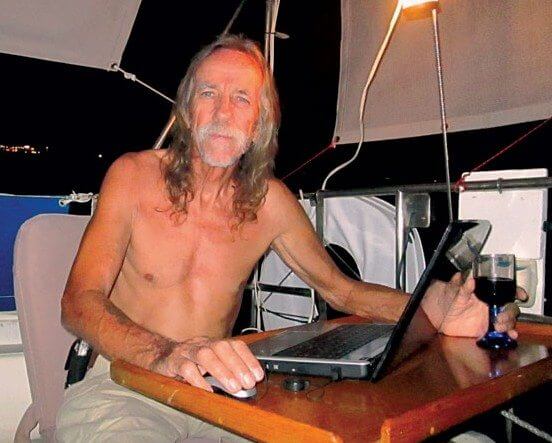 For this Editor’s Log, I moved my entire office aboard our yacht G-String and sailed away to Anguilla, where I am writing this at anchor. My laptop is on the cockpit table, I am in the shade of the awning and turtles are sticking their heads above water in an effort to get me to tell the world about them, which seems to have worked. I am anchored in water of the most beautiful cerulean blue opposite some of the best beach bars on earth, and for now I am the only cruising boat in the anchorage. There is much to be said for sailing during the so-called low season.

I sailed solo to Anguilla in order to test some of G-String’s latest acquisitions, the foremost of these being a new headsail. We have downsized, reducing the Genoa from the 150% monster that came with the boat to a 120% beauty that is so much easier to handle especially when shorthanded. Reducing sail area by sticking in a few rolls was not an option with the old Genoa as the canvas spilled wind like my grandma’s bloomers flapping on the washing line. Yes, the new sail might be a tad small in light winds, but how often do you get light winds in the Caribbean?

Item number two on test was a new tiller pilot and this performed impeccably. Electric autopilots are grand but I won’t be content until I can fit the wind vane self-steering that is currently awaiting a new part.

Item number three under test was an Internet Booster. This makes it possible for me to sit here amongst the inquisitive turtles while communicating with our publisher and design team in the US. This grey plastic box pulls in Wi-Fi signals from establishments ashore. For people whose work makes it difficult to spend time ‘off the grid’, this piece of wizardry is a must. In honor of my new friends, the booster has been dubbed: The Turtle.

If you would like more information about the above equipment, manufacturers, etc., then send me an email.

On page 42, you will find the remarkable story of the salvage of the ocean row boat Sedulous by Sasha and Tara Bouis and their motor-sailor Pi. The organization and seamanship shown in finding and recovering the row boat was impressive. And it’s not just the value of the boat, there is a poignant human interest story attached to the rescued vessel. All At Sea is delighted to bring you this story and wishes every success to the rowers who have been reunited with their boat and are planning further adventures.

I’m not the world’s greatest snorkeler but that doesn’t mean I don’t spend time in the water, in fact, once I finish this log I’ll be diving off the stern of G-String into the blue. This month, to honor our undersea paradise, we bring you the Caribbean’s ‘Top Ten’ best snorkeling spots written by Joe Zentner, a man who has tried them all. ‘Snorkeling’ is part of our series the ‘Top Ten’ best in the Caribbean. This series has proved to be very popular but of course it’s subjective. Readers have been in touch to say “we have a better list than that.” So here’s the deal – write an article about your ‘Top Ten’ Caribbean delights (or Top Eight or Top Five), and send them to me along with high-resolution images, and I’ll publish them in All At Sea. Your ‘Top Ten’ can cover the entire Caribbean or feature one island or area.