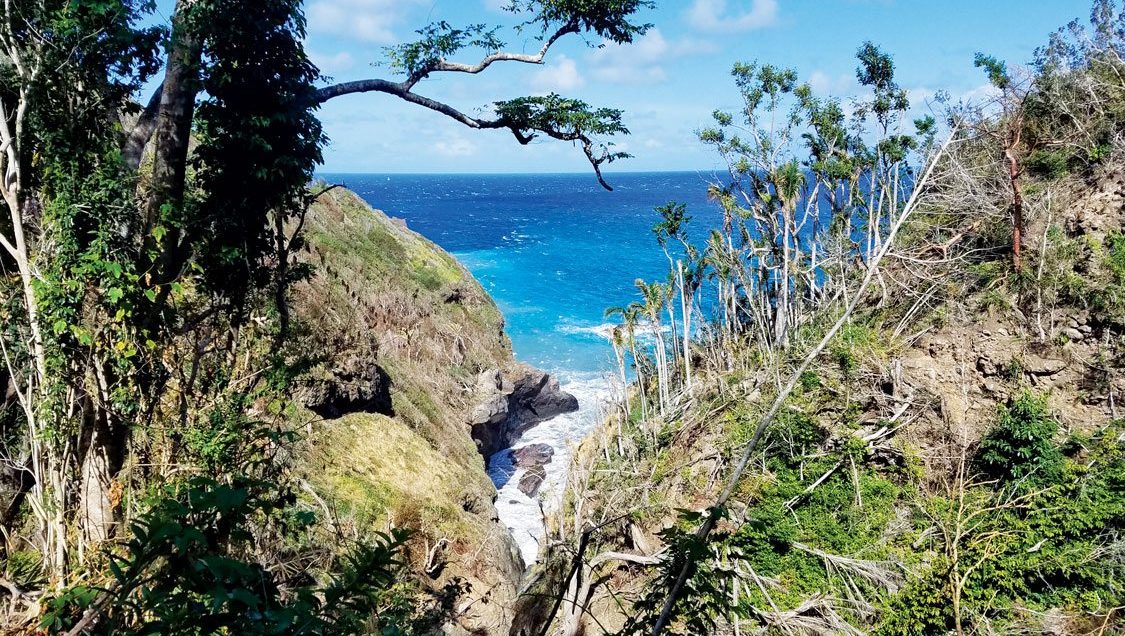 On the North-Western shore
of St Martin, across the channel from
Anguilla, lies the village
of Grande Case. Apart
from the days when the northerly swells roll onto the shore, it is an idyllic
anchorage popular with local charter boats, whose crew dock their dinghies to
plunder the strip of renowned restaurants overhanging the beach, or steady
their sea legs with a stroll down a main street where flowers tumble from the
balconies of sleepy wooden houses built in Creole times.

Yachts
that round the headland to approach the gentle bay will notice a flash of
colour shimmering under the sea grape trees at the shoreline. A closer
inspection reveals a cluster of brightly painted hulls with curves as smooth as
the bay. Propped up on their keels – bare-planked, bulbous and beautiful
– these are the Traditional boats of St Martin,
and Grande Case is not a village that forgets its past.

“These boats have been going on in St Martin and Anguilla since
the early 19th century,” says Elias
Lake, who built Trouble
and Perfect Timing with Nathaniel Benjamin. The others were built by Robert
‘Smithy’ Smith, who has been turning them out for 30 years.
“They used them for fishing and transporting, to St Kitts and other
islands.”

Those
boats, around 13 or 15 feet in length, with their broad, looming sails, are the
ones pictured in some magical sepia prints in the Marigot museum. They had an
18-20 foot mast that could be comfortably carried on one man’s shoulders.
The contemporary designs are all 23 feet long and 8 feet wide and require a
crew of eight.

“The design is in my head,” says Lake,
who began boat-building at the age of 12. “The yellow one I built in the
back under a Kinip tree. When it rains, you can’t do anything.”

The
construction is, according to Lake, marine ply with white pine for the
planking, finished with West System epoxy “and a few nails and
stuff”. The ballast is provided by lead in the keel. They do capsize, but
not that easily. Once they’ve sunk, the ballast is removed and the hull
will just float back up.

“You can build one of these in about two weeks,” says
Lake. “We took eight days to build the blue one.
With all the materials, mast and sails, it would cost about $15,000. As long as
you take care of them proper, they can last for ten years.”

Although
the boats are not used for fishing anymore, there is a lively local racing
scene, in particular with neighbouring Anguilla,
which hosts the legendary August Monday races. During this festival, hundreds
of Anguillans line the cliff tops to watch the Traditional boats do battle on
the water. The racing is frenetic and competitive, with significant amounts of
money and pride at stake. It is not uncommon for a crew of eight beating to
windward to become a crew of seven once the mark is rounded and a lighter boat
required.

The boats
are also an important element of the Mix-Up Regatta in May, when crews swap
vessels with the visiting keelboats for a race. Last year, on St
Maarten’s Day (November 11), the Grande Case boats were a
high point of celebrations, with racing off Great Bay.

Along
with the Workboats in Grenada
and the Yoles in Martinique, traditional boats
are far more than a relic of each island’s past. They are a popular part
of the racing calendar.

“They’re
coming back,” says Lake. Apart from a
brief hiatus between 1998 and 2002, when not much was developed, there is
renewed interest in building these designs, which are relatively cheap,
uncomplicated and sturdy. Even youngsters are approaching builders such as
Lake to learn the trade, and to add their own twist. The
cartoonish, pop art designs on the prows are noticeably modern.

“The designs are a sign of the times,” says
Lake, “we just take it to a different level now.”