The Private Hell of Public Speaking

I hate to admit it, but the land-sharks, shore-huggers, and dirt-dwellers have their hooks in me. That’s right. I should never have hesitated after my second circumnavigation. I should have just kept going. Circ #3, here we come! Instead, I stopped. Worse, I went ashore. Visited America. Etc.

Now I’m sunk. I’ve sold out totally, and for a mere pittance. 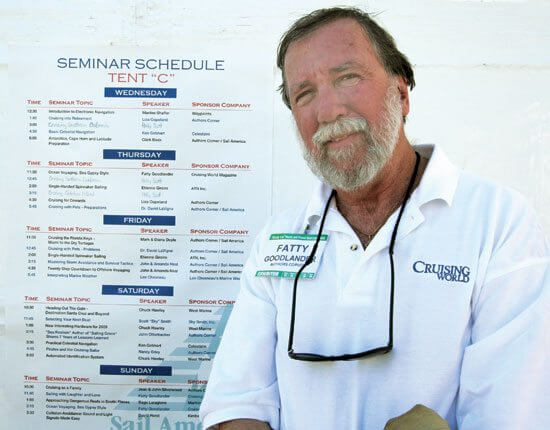 I didn’t even know I needed handlers, and now I have them.

“… but what does a handler actually do?” I asked one of my handlers.

“Important stuff!” the handler said. “For instance, we handle your affairs.”

“… but I haven’t had an affair since that Brazilian redhead picked me up in a sailor’s bar in Las Palmas while sucking on a huge red lollypop … and then she sued me for palimony, matrimony, and rigamarony—hell, she was so young I was scared she was going to sue me for incest too!”

“You just made our argument for us,” smirked the handler. “Your life was a pointless mess, Fatty. You worked for an idiot, by definition. Now we’ve seized control of your rudderless career—and are directing you towards the fabled Profit Zone! Soon you’ll be swimming in wealth, and looking down your nose at your former friends—you’d like that, wouldn’t you?”

“… but since you’ve been handling my money, I haven’t seen any of it,” I noted, trying not to be distracted by his (admittedly, very) attractive promises.

“Of course not,” said the handler smoothly. “And that’s because you haven’t earned enough to count. So far, mere pocket change. There’s not even enough to steal, let alone to take the time to embezzle. Right now, you’re a Zero Sum game, Fatty. But we’re going to change that. Soon you’ll be as big as … well, Zsa Zsa Gabor!”

For our young readers who might not be familiar with Zsa Zsa, she was a Hungarian Shark Lady who was famous for being famous—and not much else. Picture Pamela Anderson, sans the oral & video skills. But she was an A-lister despite the fact that nobody knew quite why—and thus on the talk show circuit, etc.

“… but my breasts are small,” I said modestly, desperately hoping to get out of whatever it was my handlers had planned for me.

“Nonsense!” my handler said. “And even if nature hasn’t blessed you with an impressive … how do you put it … a ‘bulging package,’ we can still stuff a rag or two down there with Photoshop—and market the hell out of you.”

I started to shake my head in negation, resignation, and stupefaction—but my handler steam-rolled on. “Corporate seminars!” he beamed.

“Not corporal, corporate!” corrected my handler.

“… but why would I talk about seminaries, when I’m not even religious?”

“… semin-ARS,” said my handler, and signaled over another handler for reinforcement. “RRRRs, as in Righteous, Rip-Roaring and Ribald!”

“But I don’t know anything,” I blurt, “at least, not anything worth knowing … well, as far as I know I don’t … although I guess I could be mistaken … possibly!”

What boatyards can handle Catamarans in South Florida

“Ah, modesty, indecision, and lack of self-awareness are admirable traits—for a loser!” said my handler commandingly, “but we’re going to make you a winner, Fatty! Yesterday, you didn’t know diddly-squat. Today, you’re an expert!”

“… a sailing expert! And not just any-ole-run-of-the-mill expert, a CIRCUMNAVIGATOR!”

The handler said this last bit with awe in his voice.

… there was so much sincerity in his tone, my eyes started watering with delusional self-respect.

I had to shake my head to clear it.

“Oh, that,” I said, then blurted out in confession. “I … I … don’t pay my bills. I’m a skipper … meaning I skip out on them. It’s that simple. I mean, why pay ‘em if your anchor windlass works? Besides, I don’t want to be a member of the Seven Seas Cruising Association. So I have to move my boat a lot. And, since my boat isn’t weatherly … well, it tends to drift downwind. If you do that long enough, you sail around the world, east to west. If you don’t believe me, ask Jimmy Cornell.”

“You’re putting the wrong spin on it, Fatso!” laughed one of my handlers. “It’s all about branding, me son! Don’t worry! Be happy!”

My first corporate seminar was with a multi-national in Sint Maarten, with dreams of world domination.

I was a bit worried. I’d practiced my speech a number of times—which wasn’t really necessary. My speech began—imaginatively, I thought—with “My name is …” and by the time I got to the word ‘name’ my audience of eager Third World corporate ladder-climbers were asleep.

I couldn’t believe it. So I tested ‘em with, “My name is … Two Pac! Brad Pitt! Morgan Freeman. Angelina! Yes, I bullied Mohammad Alley before he learned how to spell Cassius Clay! And I know who killed Biggie!”

So I happily droned on for an hour or so about my toiletry habits, and then announced, “… thanks, and lunch will now be served!”

The applause was thunderous as they hit the auditorium doors in a rush for the corporate cafeteria. “… jerk chicken!” one was shouting happily. (Actually, I didn’t hear the word ‘chicken’ too clearly—but the first part was loud and clear.)

Afterwards, my handlers said I’d done well. “It was chancy,” said the one with the shortest crew cut, referring to the student’s evaluation of the course. “But you pulled it off, Fatty. I admire your courage as a speaker—tying all those modern culture icons together at the end … masterful, really!”

Next up, they wanted me to teach sailing in November.

“Wait one bloody minute,” I said, outraged. “I haven’t the foggiest notion of how to sail. I mean, if you wanted someone to teach FLOATING DOWNWIND LIKE A SHOEBOX, sure, I could do that. But sailing? Real sailing? I don’t think so! I mean, I never could understand the ‘which way is the wind blowing’ thingy. Isn’t it apparent? Why mess it up with the True Wind concept, which is totally beyond me. This ‘true wind’ stuff is kinda like true love—you hear of it all the time but never really experience it. Or, to put it another way, not only don’t I know how to sail, I don’t even know which way the wind blows—and all the Weathermen I used to know, to ask, have mistakenly blown themselves up in Berkeley!”

“Don’t worry,” reassured a third handler of mine who had just wandered by. “You don’t actually have to say anything. We have young kids who can read and write for stuff like that—you just have to squint into the sun wisely at everything they say—does that sound so hard?”

“Not really,” I admitted, and started practicing my squint.

“In December, we have you booked into another chartering venue—but this time it isn’t about using your brain cells but rather frying them …”

I threw myself to the ground and started smashing my head about, foaming at the mouth, and kicking my feet—a classic temper trauma if I’ve ever thrown one.

My handlers just smiled an ‘allow him to get it out of his system’ smile. When I was finished, one said softly, “… what’s the big deal? You tell a few Fat Stories, and they swoon …”

“First off,” I responded, “I don’t drink. Others, alas, do. But they often lack courage to speak unless they drink MORE. So, when they finally have imbibed enough 151 to get up their courage to speak, they can’t articulate … not really. But they think they can—which is even worse.

“Besides,” I rushed on, “people don’t meet writers to hear their stories; they pay writers to meet them so they can tell the writer their stories! And, since they were emotionally affected by the writer’s prose, they demand the same in return! That’s the unspoken social contract, and woe be the ‘salt-stained inkslinger’ who violates it. So what I end up with is a totally-toasted sailor swaying up to me, lurching awkwardly into my face, and then spitting on me while slurring, ‘… and then my Uncle Harry … gosh, this is so funny … I knew you’d love it, Fatty … anyway, Uncle Harry takes the grapefruit, cuts it in half, and rigs it like a brassiere over his pierced nipples … HAW! HAW! HAW!’ I, of course, have no idea what they are talking about. None. Zero. But I’ve learned from hard experience that you’d better ‘get it’ or they will hate you forever.”

“Whatever,” said my handler breezily. “We’re sure you’ll do fine, Fatty. Circumnavigators are tenacious. You’ll figure it out—eventually.”

So that’s my reality. I stupidly stumbled ashore for a few moments, and now my professional life is totally out of my control. Theoretically, I’m making more money than ever—and yet I can’t afford to buy a cup of coffee. And, astoundingly, some people who never really believed in me are finally coming around. “… glad you’re finally getting some recognition,” one sailor told me outside of Island Water World. Another guy with a tie said, “… you’re milking it for all its worth, am I right?” Yet another quipped, “The very best time to sell out is when you got something to sell.”

“Don’t start with that integrity-stuff,” moans my wife Carolyn. “If you actually had any, surely I’d have spotted some during my 42 years of marital mistakes!”

See what I mean? My evil wife is in cahoots with my greedy handlers—and I can’t seem to handle either one!

Editor’s note: Cap’n Fatty and Carolyn are currently in Sint Maarten, gearing up and slimming down for their next Big Fat Circle. They hope to leave the Lesser Antilles in February of 2013.

Cap’n Fatty Goodlander has lived aboard for 52 of his 60 years, and has circumnavigated twice. He is the author of Chasing the Horizon and numerous other marine books. His latest, Buy, Outfit, and Sail is out now. Visit: fattygoodlander.com