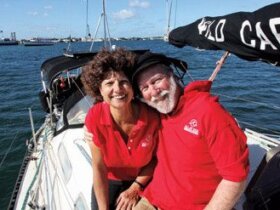 Back in the Fifties, the charter industry out of St. Thomas
got started because of loose women. Loose because they had just gotten
divorced. At that time, St. Thomas was an attractive place to get unhitched,
then look around and have some fun.

Unattached sailors
saw this as a means to make money to finance the next segment of their trip.
What better way to enjoy the company of a grateful lady for a few days and get
paid for it!

Some took it a little
far, though. The scuttlebutt at that time was that the poor dears were so
starved for attention from a dashing, swashbuckling captain that they didn’t
care if they went anywhere. Supposedly, one captain brought his new charter
lady aboard his sloop moored in Long Bay in the early evening. He fed and
watered her below decks and one thing led to another. The beguiled girl was so
overcome that she never noticed that the boat had not left the harbor until she
woke up the next morning.

Another story relates
that two sailors, friends for years, had pooled their funds to buy a boat and
sail the world. Trouble was, the boat kept eating too much. Upon arrival in St.
Thomas, they got into the "charter wench trade". On charter, neither
of them could stand washing dishes. So they always chose a shallow anchorage
and, after dinner, would throw all the dirty dishes, utensils and pots that had
accumulated that day OVERBOARD. The next morning, before the ladies got up,
they dove up all the gear for the next meals.

But the majority of the boats belonged to
cruising couples who chartered for a couple of seasons before heading across
the Pacific. Theirs were definitely not floating hotels. In fact, some of their
guests were darn lucky if they didn’t have to sleep in the cockpit. Give up
your bunk for a paying guest? What was wrong with their using those bunks in
the forepeak? They only had to squeeze around the sail bags, extra life
jackets, cases of booze and sodas, engine parts, canned goods and other stuff
stacked up there.

Their guests even
had their own head which sat between the bunks. Real privacy, too, with a
tattered, badly-draped curtain halfway concealing it from the rest of the boat.
That was quite a luxury compared to having to climb up the little ladder,
squeeze through the hatch, skirt past the dozens of diesel and water jugs
lashed to the shrouds, make their way back to the companionway and down the
very steep stairs to use the only other head up by the galley.

Chartering in the
Caribbean came to our attention in Fort Worth. Avid racing dinghy enthusiasts,
we had a tiny house on Lake Worth where we kept our Sunfish at the dock, and
later, a Flying Dutchman on a trailer across the road.

Then the house
burned down. The neighbors called Mike who was at work. The first thing he
thought of was where the sails were for the Flying Dutchman. He knew that the
boat was safe. After he arrived to find the house almost completely gone, he
called me at work.

"Are you sitting down?" he asked.

"The house just burned down. I’m looking at the
ashes."

Once we calmed
down, we realized that the sails were still in the trunk of the car. Usually
they were kept in the sail locker inside the house but we had been to a regatta
the weekend before and had not removed them. Whew!

From this small
catastrophe we realized that sailing was more important to us than anything
else and that work was getting in the way of sailing.

What to do? Find
out how to make a living sailing, quit our jobs and sell everything to buy a
boat!