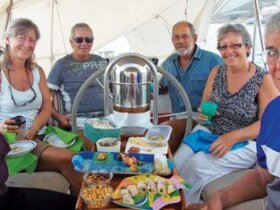 Cruising: A Life of Howdies & Goodbyes

SMYC Members, Jan Roosens and Veerle Rolus owners of the Maritime School of the West Indies have this amazing offer for three students / trainees to sail the EENDRACHT.

Please read further and contact them on the below details if this is something for you or your child.

Tall Ship “EENDRACHT” to take three trainees on board in St.Martin for one week sailing.

The Maritime School of the West Indies has received an invitation from the Tall Ship the “EENDRACHT” to bring three student / trainees on board to sail on a one week cruise in the Leeward Islands starting January 20 until January 27.

The school has sponsored and placed many youngsters in the past on Tall Ships, Yachts and other vessels to experience sailing while studying in the marine sector.

The foundation ‘Het Zeilend Zeeschip’ (‘The Sailing Sea ship’) which is based in Rotterdam, Holland, exploits the Eendracht.

Especially youngsters are given the opportunity to explore the sea, working together as a team and advancing their perseverance.

The stimulation and guidance of youth has been the goal ever since the foundation started, and is widely supported.

Sailing at sea as a team is not only character building, but also contributes to solidarity.

The Eendracht also takes part in the Tall Ships’ Races for youngsters.

The vessel has a rich history which dates back to 1938. At that time the professional sailing ships were forced out of work more and more by motorized boats. The association at that time had the aim to keep training facilities on a large sailing ship available.

The initiator and first chairman was Mr. C.J. Jaski. His direct relative Mr. B. Jaski is the current chairman of the foundation ‘Het Zeilend Zeeschip’.

Support for building a sea sailing ship failed directly after the second World War. Eventually it was possible to realize the first Eendracht.

Besides the association also a foundation was started in the name of ‘Het Zeilend Zeeschip’.

In 1972 prince Bernard accepted to be patron of the association which his grandson prince Maurits later continued. Around 1989 the building of a new threeâ€masted schooner started, since the first one had become too small.

On August 26, 1989 Her Majesty Queen Beatrix baptized the current Eendracht.

The association has been active for all those years and continues to do so.

The Eendracht is Holland’s largest threeâ€masted schooner. The ship measures nearly 60 meters in length, 13 meters in width and
has a depth of 5 meters. The Eendracht belongs to the A class ships, also known as Tall Ships; the largest sea sailing ships in the
world.

The Eendracht is built to sail at sea with young and inexperienced people. Therefore safety comes first. There is no need to climb the masts. All sailing action can be done from the deck. By this anyone can come along and learn how to sail.

The Tall Ship has over 350 well trained, mostly voluntary, professional crew members. Naturally they man the ship in smaller teams on its many travels.

Students (boys and girls) in between the age 15â€25 that are interested to sail on the Tall Ship EENDRACHT during the week of
January 20â€27, 2011 are invited to contact urgently the Maritime School of the West Indies by email:
[email protected] or the Caribbean Sail Training Association : [email protected] and send a
CV together with the email, or come in person to the Maritime School of the West Indies, Marina Royale 20 Marigot St.Martin
or call the office at 590590510495 or 599 5231209 for an appointment.

All costs except for drinks and personal expenses are covered by the Maritime School of the West Indies and the
Caribbean Sail Training Association.