Sweethearts of the Caribbean Regatta 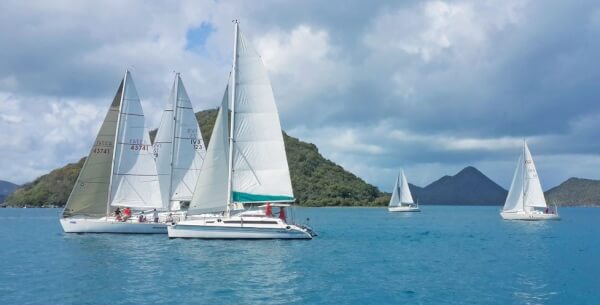 There were few sweethearts and the weather was less than sweet due to squalls, but that didn’t dampen the fun for those who set sail in the 37th Sweethearts of the Caribbean and 33rd Classic Yacht Regatta, held Feb 14 to 15, out of Soper’s Hole, Tortola and sponsored by Mount Gay Rum.

New this year was the addition of an Open Class, in which boats of any age, construction or type could enter, in an effort to boost participation. It was Boomerang, a J/33 owned by Kevin Wrigley, loft manager of Quantum BVI, which won this class during both days of racing.

“Saturday was a pursuit style race around the northshore, Sandy Cay and Jost to West End. We are fast, so we started last and finished first. We had a lot of newbies aboard as crew and it was especially a lot of fun for them,” Wrigley explains. “On Sunday, the fleet racecourse ran to the south past Pelican, the Indians and Flannigan. Just our boat and Zing decided to play the St. John side and it paid off when the wind died.”

Zing, a J/30 owned and skippered by St. John, USVI’s George Stuckert, won the Single-Handed Pursuit Class on Saturday and the Classics Class on Sunday. On Saturday, “playing each gust was the name of the game,” says Stuckert. On Sunday, it was capitalizing on winds that suddenly picked up from zero to 12 knots with a 180 degree shift that put Zing second across the line behind Boomerang and first in its class.

The Tortola sloop, Youth Instructor, was the one ‘sweetheart’ or classic wooden boat out of the 17-strong fleet. The BVI’s new governor, John Duncan, sailed aboard with Brian Duff and BVI Youth Sailors, Thad Lettsome and Rayne Duff.

“The rain definitely affected this year’s entry,” says organizer and commodore of the host West End Yacht Club, Martin Van Houten, “and there are less classics out there, but everyone who raced had fun both on the water and at the post-race parties at the Fish n’ Lime Restaurant.”