Hurricane season is here. Having ridden out several hurricanes, and having had a boat smashed by one, I feel qualified to offer a few suggestions on storm readiness.

In times past yachtsmen would be gone from the hurricane belt before the start of the hurricane season and this is still the only way to guarantee you won’t be caught in a Caribbean hurricane. However, for many of today’s cruisers, leaving the hurricane belt is not an option. I live in the Caribbean year round and therefore must deal with hurricane season. When my boat was smashed by hurricane Gonzalo, I fell into the trap of not preparing early enough. I also relied on the weather forecasters who later admitted that Gonzalo didn’t behave as planned.

Although I can lambast the met office for a dodgy forecast, the buck stops with me. My seamanship and judgment were at fault and I paid a high price.

If you can’t haul out, and plan to stay afloat for the season, then here are a few things to consider. 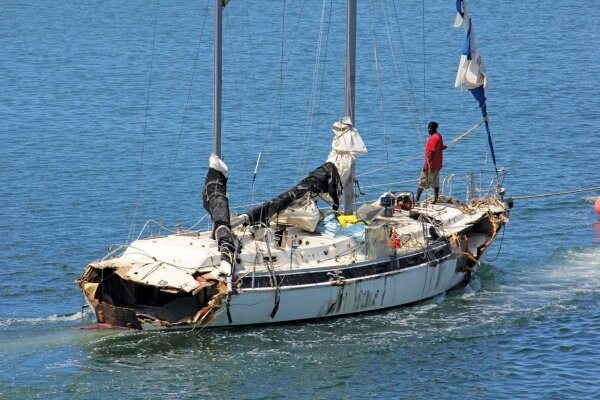 Location
Choose your spot early and get as much ground tackle down as you can. Remember, other boats will be seeking shelter and will anchor close to you … this is a given. When I rode out Hurricane Luis in 1995, I was holding to a concrete mooring block and five anchors. I kept one anchor in reserve but didn’t use it even though I lost one anchor thanks to chafe. Lashing your boat to mangroves with anchors deployed from stern or bow is a proven way of surviving a storm. However, environmentalists in places like St. Maarten are trying to limit such actions. If you are in a so-called ‘Hurricane Hole’, then seek the advice of people who have sheltered there in the past. Coral Bay, St. John would be an example.

Chafe is your enemy
If you are lying to chain then you will need long nylon snubbers to prevent snatching. It is vital to protect nylon snubbers or anchor rode from chafe. Leading snubbers and rode through bilge hose works well but modern bow rollers are notoriously inadequate and there probably won’t be room for more than one hose and line. Where to lead everything is something you must work out for yourselves. During Hurricane Louis, I took extra snubbing lines back to the primary winches, and I had the bitter end of one anchor chain through a pipe and shackled around the base of the mast. ‘Belt and braces’ is your motto.

Windage
Try carrying a 4×4 sheet of plywood in ten knots of wind and you’ll quickly learn about windage. Strip your boat of everything that increases windage: Sails, awnings, spray curtains, BBQ, take off as much as you can; including external halyards (leave a couple so you can go up the mast after the storm). Stow the dinghy and never, ever leave the headsail on the roller furler, it’s a boat smasher.

Staying aboard in the blow
I have heard it said that there is nothing to be gained by staying aboard. This isn’t strictly true. There is a lot you can do. For instance you can shake in fear, you can also tend the lines and keep chafe at bay. Before the wind really picks up, you might also be able to fend off should a small boat drag down on you, but if it’s an inter-island freighter, then good luck.

At some point during a ‘monster’ storm you will find there is little you can do but hang on. And don’t expect anyone to come and get you, they won’t. Running the engine to maneuver is marginally possible and some skippers have reduced the load on dragging anchors and in this way saved themselves from going ashore. Be aware that the sea floor will be in motion and sand and debris might find its way into the water intake and the engine overheat. It happened to me. Dirt in the fuel tank will also be stirred up. 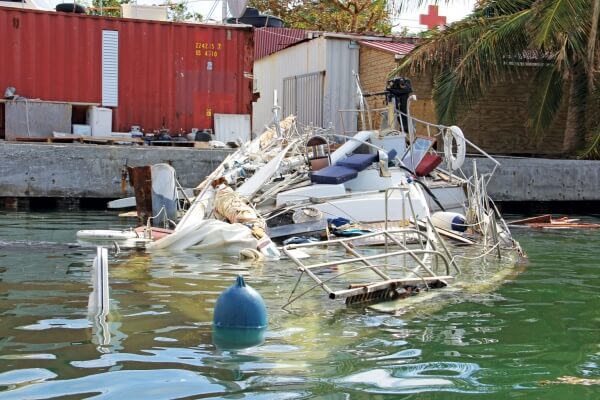 Moving ashore for the blow
I’ve ridden out several hurricanes both afloat and ashore. Ashore, I did nothing but fret about leaving the boat, afloat I did nothing but cuss for not staying ashore. If you do head for shore then take your valuables, electronics, money, papers and documents with you. Sadly, if your boat does break free and go ashore, you might not be the first person to arrive on the scene.

Fight or flight
Leaving an anchorage to outrun or out maneuver a named storm is fraught with danger. Lack of wind ahead of the storm, boat speed, crew endurance and unreliable weather forecasts are just a few of the factors to consider.

Summing up
If there’s a weak link in your preparations, the probing storm will find it. Skill, local knowledge, experience and good equipment all help. Common sense is vital.

Gary Brownhttp://garyebrown.net
Gary E. Brown is the Editorial Director of All At Sea Caribbean. He is a presenter on Island 92, 91.9 FM, St. Maarten, and the author of the thriller/sailing adventure Caribbean High. For more information, visit: garyebrown.net
RELATED ARTICLES
Caribbean