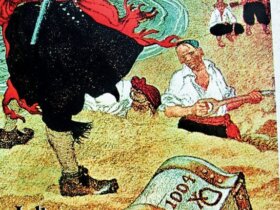 Pirates of the Virgin Islands

Saunders Yachtworks was named 2012 Business of the Year by the Alabama Gulf Coast Area Chamber of Commerce during the chamber’s annual meeting on Feb. 15, 2013. Saunders’ President and CEO John Fitzgerald accepted the award.

“It is with great humility and honor that I accept this award on behalf of the employees at Saunders Yachtworks,” Fitzgerald said. “There is no way that my words can encompass the great skill and responsibility exercised by our talented employees. A great business can only succeed if it has the support of a great team, and Saunders is fortunate to have such a team in place.”

“It was the vision of Andrew Saunders Jr. to build the Boatyard of the Future of the Northern Gulf,” Fitzgerald said. “We are committed to fulfilling that vision, and even though he is retired from daily operations, we are fortunate to have Andrew’s continued leadership and investment.”

According to the chamber, local businesses are nominated and chosen for this prestigious award based on their innovation, involvement in the Gulf Coast community and well-rounded business organization. The business must be a chamber member and have been operating for at least three years.

Chamber Chairman Kevin Corcoran said the recipient of this award must also possess strong leadership and adaptability to change.

“Saunders has demonstrated excellence in all of the criteria for this award,” Corcoran said. “Their commitment to our chamber, local economic development, environmental initiatives and to promoting and improving our wonderful coast is outstanding.”

The Saunders family has been in the marine service business since 1959 and has operated Yachtworks at Orange Beach Marina since 1995. The company has a brand-new boatyard and basin in Gulf Shores, Ala., and offers a full array of mechanical services, vessel systems installation and repair and boatyard crafts at both locations.