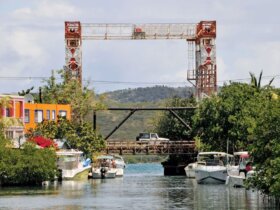 Take one of the most charming ports in the Caribbean, add two
talented French architects, and the desire to create an impressive “
Capitainerie.” The result is the handsome new
building that opened in late January on the main dock in Saint Barth. Over a decade ago, a master plan was put into place
for the development of the Port
of Gustavia,
the yacht basin for Saint Barth that serves as one of
the major economic factors of the island, as well as one of the most popular
ports in the region.

Over the
year, the various elements of that master plan have become reality as the docks
themselves have been improved, with added amenities such as electricity,
television, and internet service (only water was available before) and the main
dock has been paved in granite blocks. The new building housing the Port
offices and a large reception room add a serious bit of architecture, as well
as much needed facilities, to the infrastructure of the Port.

The
handsome new building, designed by two Saint Barth-based
architects from France, Pierre Monsaingeon and
Philippe Stouvenot, is called “The Capitainerie.” Its exterior combines natural elements
such as fieldstone and wood, with more modern touches of stainless steel such
as the railings and staircases that run along teak decks and a large teak
terrace, recalling similar elements in nautical design. An outdoor lookout
above the curved entry area is topped by a round white roof, referred to as the
“world’s largest Frisbee.” This modern architectural touch also
evokes a nautical sensibility.

Inside,
the Port staff are comfortable in modern offices,
furnished with light wood desks and bookshelves with blue upholstered chairs
that blend nicely with the gray of the tiles on the floors and the blue doors
throughout, not to mention the blue of the sea that can be seen through all of
the windows. “In 1984, the staff was only two people,” points out
Port director, Bruno Gréaux. “Today, we
have a staff of 10, and handle all of the administration for the main docks, as
well as the year-round residents of the Port, and the increased traffic at the
commercial dock in Public. There are also more ferries and cruise ships than
there were in the past. The Port has developed to meet all of these
needs.”

The entry
area on the first floor is much larger than in the old “
Capitainerie,” as well, providing a more comfortable
situation for Port clients as they fill out paperwork upon arrival or departure
from the harbor. Upstairs, in addition to an office for the Port director, one
for the harbor masters (both with windows overlooking the docks; the
harbor’s masters’ office has a view as far as Saint Martin on a
clear day), and one for administrative personnel, there is also a large
reception room with a vaulted wooden ceiling and a wall with small round
windows that echo portholes on a ship. This room opens onto the long teak deck
and teak terrace, also overlooking the dock.

Other
improvements include the latest in computer technology and TV monitors in the
walls to display important information, as well as an electronic weather
station to indicate the force and direction of the wind, and new services for
boats including electricity, telephone, and Internet (there are under
development). “Another improvement for the staff is a locker room with
showers where we can change,” says Gréaux,
who will have a large magnetic map of the Port zone and individual magnetized
boats that can be placed according to their placement in the Port. All of these
improvements mean not only better working conditions for the staff, but also
better service for the clients of the Port. “Some of our clients have
said the new Capitainerie is the most beautiful they
have ever seen,” Gréaux notes.