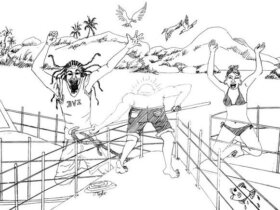 There’s a big distance between the helm and the bow on a 50-foot yacht. So when the helmsman needs to communicate with the bow crew in an anchoring or mooring situation, especially in a 30-knot breeze, voices are often raised to full volume and sometimes instructions and countermands are reduced to shouts of rage and screams of frustration… unless a system of sign language is used. It is a real pleasure to watch an experienced team on a large yacht anchor or moor perfectly without as much as a shout or hint of profanity.

As a sailing instructor Charlie is rigorous at teaching proper anchoring and using correct hand signals but recently he had a group of European sailing students who pooh-poohed this aspect of instruction, “We anchor in ze Med all ze time, no problem,” said the Claude, a Frenchman. The Bulgarian couple from Sofia nodded in agreement so Charlie just glossed over this aspect of the course thinking he must have experienced students.

Next morning, anchored in Gorda Sound, it was time to raise the anchor and Charlie told the ‘experienced’ neophytes to go ahead using the appropriate hand signals. The maneuver worked well at first but then the chain slipped off the gypsy and the entire length ran out into the sea (the bitter end was tied off, thank goodness). The Frenchman at the helm shouted at the Bulgarian anchorman and was quickly reprimanded by Charlie, “Seulement gestures,” (only gestures) he said in passable French. On the second try the anchor chain came up nearly all the way but then stopped ten feet from the roller. “Now what!” shouted Claude just as the anchorman gave the clenched fist in the air – meaning to most of us that the anchor is up… but to the Frenchman it meant ‘Up Yours.’

Claude, now completely forgetting the etiquette, shouted loudly at the bow, “Ees all OK?” and made the diver’s sign of  ‘All OK,’ a circle of thumb and forefinger. Apparently in Eastern Europe this means something to do with your mother’s anatomy and Ivan, the Bulgarian, was not happy. Just then, he bent down to secure the anchor locker and his pants (this is absolutely true as told to me by Charlie) and fell to his ankles displaying an almost perfect moon to the French couple. He was wearing those ridiculous low rider shorts and they do tend to be loose. At this stage Claude lost it. “You are not a Bulgarian,” he said, “You are a Vulgarian.” Ivan shot back with F—ing Frogs and Charlie had his hands full for a while.

The next day Charlie devised a new set of hand signals to communicate between bow and stern, “When the anchor is up and at the roller you can give the sign of the middle finger of your right hand,” he gestured with a perfect ‘bird.’ After a moment of silence and a few inquisitive stares they all roared with laughter.