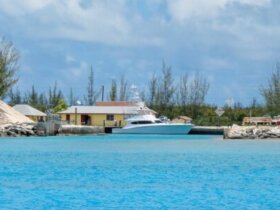 Guide to San Salvador Island in the Bahamas

The scuttlebutt is true. Richard Branson has purchased Moskito Island in the BVI. For 20 million dollars he becomes the owner of his second British Virgin Island, which he intends to turn into an ecotourism resort complete with solar power, wind power and Balinese-style pagodas for accommodations. We’ll see! I just can’t help looking into my crystal ball and seeing a row of mega yachts tied stern to the sheltered shoreline inside Colquoun Reef.

The island is an absolute gem. It has a beautiful palm-lined sandy cove with a healthy reef just off the beach at the island’s western end. A trail of palms wends its way along the central ridge. There’s a tiny sandy enclave protected by two rocky cliffs on the north side known as Honeymoon Beach, a rocky beach and two magnificent lookouts. The island is protected by two off-lying reefs—former owner Bert Kilbride named them Twenty-five Dollar Reef and Fifty Dollar Reef. In the days before Colquoun Channel was marked bareboats would get stranded on them on a regular basis and that was the charge to get towed off. Sounds cheap nowadays, doesn’t it?

“There’s something about islands that fascinates me,” said Charlie, as we chewed the fat over a cold one, “especially the small, tropical ones. They have a lee where you can anchor your boat, usually a reef where you can catch a fish or conch for dinner, a palm tree with a coconut or two. You can climb to the top for a view or walk the circumference for fun.”

“You’re right,” I replied, “but tourists are often baffled by islands. ‘Do the islands go all the way to the bottom?’ was a question that had me choking on my Heineken. Another was ‘Are the islands joined together?’ Well, sometimes you just have to abruptly change the subject.”

Tourists are often anxious to know how long Charlie’s been sailing as a sailing instructor or charter boat skipper. He sidesteps the question and replies, ‘Last year I did 25 circumnavigations.’ As the awestruck tourist gapes open-mouthed, Charlie changes the subject to heavy weather sailing. He never mentions that the circumnavigations were island circumnavigations andsimply around Tortola!

Tourists can be gullible, can’t they? God Bless ‘em.