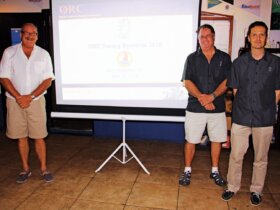 Mega Yachts and Super Yachts have only been of passing interest to Charlie, him being more of a traditionalist, but when Charlie is asked to write a story about any facet of boats and the sea he jumps at it â€“ the reason is simple: investigative writing, especially concerning sea stories, is fun.

It was the day before the Loro Piana Superyacht regatta hosted by the prestigious Yacht Club Costa Smeralda in Virgin Gorda. Charlie arrived in the morning after a windblown fast tender ride to the marina. He stepped onto the dock and was almost bowled over by all the testosterone in the atmosphere. There were crews all nattily attired in logo adorned uniforms, running hither and thither getting ready for the final practice before the event. The wind was blowing 25kts from the northeast and beam on to the yachts tied stern to. There were nervous moments as bows slewed sideways, anchor rodes stretched taut in the gusts and spinnakers and canvas sought to escape from bags on deck. Amazingly, a crewman on one yacht was being hoisted up the mast â€“ just to reach the mainsail cover.

Nerves were being stretched â€“ no doubt about it. Owners have to be kept happy and if things go wrong a professional crew member can be fired on the spot. Goodbye six figure salary. If something goes awry like a boat drags its anchor and scrapes another gold-plater, a bill for 10k can easily result â€“ and thatâ€™s just for a scratch.

There wasnâ€™t much friendly banter â€“ everyone was pre-occupied or pretending to be busy. Charlie ambled down the dock taking mental notes: a couple of crewmembers were sucking away on fags, in European style, gesticulating in an Italian frenzy, whilst another was sharpening a pencil close by on the transom.

â€œGetting ready for some serious navigating?â€ inquired Charlie with a twinkle in his eye.

Nothing, no response, not even a smile. Then the fag puffer replied, â€œEee no speaky Eeengleesh.â€ Charlie felt a bit better â€“ at least he wasnâ€™t being snubbed (or was he?).

High-tech instruments, of course, have long since seen the demise of traditional navigating. Now, at the push of a button, you can find out where youâ€™ll be next week and what youâ€™ll be having for breakfast.

One of Charlieâ€™s jobs was to find an owner and do a pre-arranged interview. Eventually, settled into comfy chairs in the clubhouse, when Charlie asked if said owner had an interesting sea story to share about racing there was an embarrassing silence. Then Charlie related the one about surreptitiously throwing a pinless shackle up into the mainsâ€™l at a crucial moment like rounding a mark. The trick works when everyoneâ€™s attention is diverted as the shackle falls to the deck and the possibility of the mast falling down appears imminent. This elicited a response.

â€œWhen I was learning to race, my mother told me it doesnâ€™t matter if youâ€™re on port or starboard, if a collision seems imminent just shout out as loudly as possible and with great conviction, Starboard. Youâ€™d be surprised how often the starboard boat gives way.â€

And that may be the key to becoming a billionaire super-yacht owner.