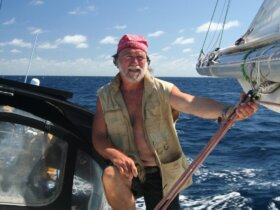 Rony Maffi was born with an artist’s soul; his talent was inherited from the Guaiqueri Indians who lived in the Araya Peninsular of Sucre before the Spanish conquered Venezuela.  His mother, Yesenia, is a self-taught sand sculptor who passed this gift on to Rony in a technique that he now uses called Pariche, which means mountain of colors in Indian.  As a child Rony always lived by the sea as he was born on the Araya Peninsula, and now, as an adult, he lives in Cumana, Sucre, also on the sea.

Rony has an amazing talent as he uses only his hands and a needle – he has no molds or other tools but he does have varying sizes of needles.  His clay is collected on the beach from underneath the sand, in wet form; he then takes it to his mother’s house to dry – outside in the sun. This is known as the first drying stage.  Once the clay has a hard form, he makes it into powder with a pestle.  After it is pulverized he puts the powder in a large container with fresh water to desalinate the clay. He then puts this in a colander with a very fine mesh bottom and sifts it through.  Once it is strained he places it on a large plastic sheet, approximately 6 x 4 feet, to dry until the texture is pliable. The drying time depends on the weather as everything is done outdoors.  This is known as the second drying stage. He then makes the many designs that he has created in his head, using no patterns.

Rony uses only his hands to mold and a needle to get the desired shape, as he sculpts necklaces, earrings, anklets and bracelets as jewelry; he also concentrates on larger things such as plates, jars, sculptures, and wind chimes, etc. His variation in color is obtained by the degrees of heat used in a single firing.  Because of the extensive process, he does not fire until he has created many pieces.

His kiln is made of Venezuelan refractory bricks, cement and fiber and he uses the same kiln that his mother has been using for 26 years.  She started when Rony was a baby; because she was always working with her hands, he learned the process when he was quite young.  He started helping her at three years old and is the only sibling out of five who has carried on this local tradition.

Making the rounds of the many art fairs in Venezuela, he also sells at the various beaches, in the open markets and in local stores in Cumana.  I met him at an art fair and immediately fell in love with his simple, but exquisite designs.  As we talked he told me, “I love my art.  It makes me feel close to the earth and the sea.  I love the sea and am delighted by the ocean.  Each night I fall asleep to the waves; in fact, some of my best designs are either from my night-dreams or daydreams.” He also enjoys going out with friends in their boats where he is inspired by sea life.

Rony also enjoys visiting his father, who is from Italy.  His future plans include a return trip to Italy showing his designs and he also would like to travel selling his art throughout South America and the Caribbean.  Considering that he is this talented at only twenty-seven, I am sure he will reach his dreams of becoming successful.  If you are cruising in Venezuela, see his art in any of the many street fairs in Puerto La Plata.