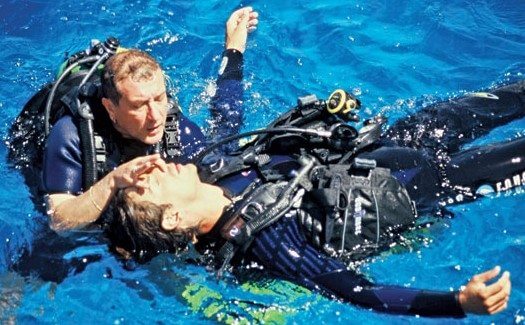 Countless numbers of divers state that the Rescue Diver Certification course they took is the course that provided the greatest sense of accomplishment and confidence. While a few rescue techniques are covered in Open Water and Advanced courses, a good Rescue Diver instructor opens a whole new world and gives students much more self-assurance. When taught properly, rescue students often feel like they are in boot camp and those who complete the course will never forget it.

I for one won’t forget my private course, a course I traveled a long distance to take from a technical diving instructor. And, boot camp it was! My victim during the course was a body building competitor who was solid muscle, weighing over 100 pounds more and standing a foot taller than me. Fortunately, he was tough and thick skinned. In spite of bruises and abrasions from my dragging him across gravel and stone since lifting and carrying was not an option, he complained only once and reminded me that his nose was not a recommended lift point.

A few years later I was diving on a wreck off the coast of Honduras looking for photo ops when I spied an old Barbie doll lying under the bow. I’d been diving the wreck for several days but hadn’t noticed Barbie previously so assumed she’d been washed out of the wreck during a storm the night before. I ‘rescued’ poor Barbie, stuffed her in my BC, and continued my photo assignment.

That evening at dinner, a dive instructor stood up and loudly asked if anyone present was the so-and-so who took Barbie from the wreck.

Instead of confessing I looked around as if waiting for the culprit to confess. No one moved as the instructor proclaimed that the so-and-so had caused her rescue class to do an extra search and recovery dive because Barbie went missing and a weight belt had to be substituted. And, by the way, Barbie had special significance as she was the instructor’s childhood pal.

That evening, I made a late night dive on the wreck with Barbie. I placed her back under the bow and covered her with sand leaving only one arm exposed. As I hoped, the following day the newly certified rescue divers found Barbie and assumed they’d missed her due to a current that had covered her with sand. The instructor was happy to be reunited with her special Barbie doll so I thought all was well.

Back near the wreck the following morning, I was lying on the bottom with my camera, being ever so still in the hopes that a patch of garden eels would reveal themselves. Out of nowhere came the entire class of new rescue divers intent on saving me. Signaling OK didn’t stop them. One by one they each came to check on me, tapping my shoulder, feeling for a pulse, shaking me.

In the dining hall that evening, I explain that I was working on garden eel photos and not to worry if they saw me lying on the bottom; check for exhaust bubbles, and thanks for being so diligent.

The next morning, after borrowing the largest diver’s slate I could find, I wrote on the slate, ‘I’m fine, don’t worry, enjoy your dive’ and placed it near the eel patch. It didn’t work. I was repeatedly rescued that day, too, and eventually had to search out a garden eel patch away from the underwater path divers followed to the wreck.

That night I was the last to arrive for dinner. And they were waiting. The entire crowd erupted in laughter and leading the crowd was the dive instructor who was holding Barbie aloft.  Seems the enthusiastic new rescue divers were directed to rescue me by my friend, their instructor, who was conveniently hidden on top of the wreck directing my multiple rescues.

Since rescuing Barbie and being ‘rescued’ many times on that wreck, the skills I learned during my rescue diver training have been invaluable in real life situations with real, live divers in trouble. All occasions that called for the use of my skills involved divers with only the basic dive course under their belts. They all survived albeit the fear and lack of experience that caused their troubles to begin with probably kept them from diving ever again. In place of thanks or a beer, I always tell those I’ve assisted to enroll in a rescue diver course. They won’t be sorry and they will be much better, more confident divers.

Becky Bauer is a scuba instructor and award-winning journalist covering the marine environment in the Caribbean. She is a contributing photographer to NOAA.

Becky_Bauer
Becky Bauer is a scuba instructor and award-winning journalist covering the marine environment in the Caribbean. She is a contributing photographer to NOAA.
RELATED ARTICLES
Board Sports