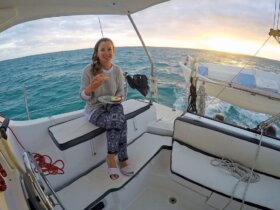 Now you can see more clearly while navigating at sea. In June, FLIR Systems announced that Raymarine Axiom+, a powerful new series of multifunction displays (MFDs) for anglers, cruisers and sailors, plus updated Raymarine LightHouse Charts cartography, will bring new levels of clarity and control to marine navigation. The successor of Raymarine’s award-winning Axiom-line of MFDs, Axiom+ is engineered for speed, responsiveness, and future expansion.

Along with the upgraded Axiom+ line, Raymarine is unveiling a new electronic catalog of LightHouse Charts. Engineered for both recreational and professional applications, LightHouse Charts allow captains to switch between an official government-style chart presentation or an information-rich leisure chart view.  Captains can also choose between four chart color pallets optimized for bright sun, dusk, and nighttime lighting conditions.

Each model includes a three-year warranty. With models starting at $749, the Axiom+ is available now through Raymarine dealers and retailers. New LightHouse Charts will be released in early fall and will be available with the purchase of any new Axiom+ MFD. Chart prices will start at USD 79.00. https://www.raymarine.com/multifunction-displays/axiom-plus/

Poets often write about the joys of falling in love—they seldom mention the painful break-ups that invariably follow.