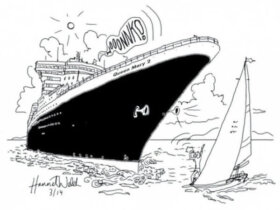 If the boat is happy, the crew is happy

The waters around the British Virgin Islands have virtually stayed the same over the last century. Yet the sailboat racing has changed dramatically. The early 20th century saw skippers of hand-built wooden Tortola sloops race their goods to market, whereas it’s sleek sailing sport boats with well-trained crews that compete in today’s 21st century BVI Spring Regatta. The 43-year- old regatta gave a formal nod to the BVI’s sailing past for the first time in 2014 with the inception of a Marine Heritage Day. The nostalgic tradition continues this year on April 2nd, the layday between the BVI Sailing Festival and main event BVI Spring Regatta.

“The island was established around its marine environment,” says regatta director, Judy Petz. “Two years ago when we found and brought home the 1912-built Intrepid, a 22-foot Tortola sloop, we realized we had an opportunity to share its wonderful history and that of those who built the island’s marine industry with our sailors and guests.”

Last year, the first-ever Marine Heritage Day showcased many activities. First, there was the Tortola Sloop Spring Challenge. Three locally-built sloops – the Intrepid, Sea Moon and Youth Instructor – were raced against one another by adult and junior crews. It’s not an easy proposition to maneuver a keel-less boat, yet the BVI’s Andrew Waters at the tiller of Youth Instructor bowled across the finish line first. Then, BVI optimist dinghy sailors Thad Lettsome and Rayne Duff escorted the Intrepid to Nanny Cay as it sailed with the Queen’s Baton from Jost Van Dyke to Tortola. Lettsome carried the Baton ashore to the regatta village at Nanny Cay Resort and Marina and handed it off to Glenford Gordon. Gordon is a local sailor who won a silver medal at the 2011 Special Olympic World Games in Athens. The BVI was one stop in the Queen’s Baton Relay, which saw the Baton travel more than 100,000 miles in the run up to the Commonwealth Games in Scotland last August. Finally, there was the launch of the book ‘Building a Virgin Island Sloop’ written by Professor Geoffrey Brooks, curator at the VI Maritime Museum, and illustrated by Lutia ‘Tia’ Durante. Both men were in attendance to sign copies.

“New this year, in addition to our youth, and many of the original builders, we are planning to possibly allow visiting sailors to go out on the sloops for the sloop race. This is to raise awareness and funds to help with more restoration,” says Petz.

The Tortola Sloop Spring Challenge will start at 10am. Spectators can get a great view of the action from the beach at Nanny Cay. This marks one of only three times annually these sloops come out to race, the other two being the Sweethearts of the Caribbean Regatta in February and the Festival Sloop Shoot Out & Heritage Regatta in August.

There will also be displays throughout the day explaining the history of the sloops. Copies of ‘Building a Virgin Island Sloop’ will also be for sale. The afternoon wraps-up with final registration for the BVI Spring Regatta and opening Mount Gay Rum Welcome Party. It’s a perfect way to enjoy the past and the present.