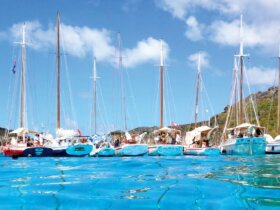 John Holmberg has had his captain’s license for 30 years and has certainly made good use of it. He learned to sail 40 years ago on St. Thomas, and he still remembers the first time he capsized off of Sapphire Beach. He was four and his brother Peter (the Peter Holmberg of match racing and America’s Cup fame) was three. Their dad would take them out on a sailfish, a predecessor to the Sunfish. His best memories are of times out on the water or hanging around boats, and he has a lot of those memories. He’s spent his life on the water and he’s done it all, from teaching windsurfing at the Bitter End to captaining private boats that spend their summers in the Northeast.

Holmberg went on his first charter when he was 12. He’d been working at a boatyard and was in the middle of painting the bottom of a barge when a Puerto Rican family who’d just chartered a Cal 46 offered him $25 a day to take them around the islands. He packed his bags and took off for the week.

“They knew nothing, and they wanted to make sure they didn’t run the boat aground. Then I ran the boat aground,” he says with a laugh. But to Holmberg, that’s what sailing is all about. In that instance he knew enough to get the boat heeled over to get off the sand bar. Even by the time he was 12 he’d been to national and international sailing competitions, and he has spent his life learning all he can about the sport.

Most recently, he became the owner of The Captain’s School on St. Thomas. Based out of American Yacht Harbor on the east end of the island, Holmberg and several other licensed and seasoned veterans of the sailing trade teach courses that vary from simple “learn to sail” classes all the way to STCW certifications and other coast guard-approved licensing.

The job description suits this avid pursuer of sailing knowledge who, when I asked who had influenced him most in the sailing world, responded, “I could give a list of all the people that have been influential, but it’d be a really long list. I’ve tried to learn from everybody I’ve sailed with, even if it’s learning what not to do.”

And it’s not just his own learning that he’s interested in. “I’ve learned I love to teach. I love to share my experiences, my knowledge. I love to see the sparkle in someone’s eye when they get it, when they get excited about the sport,” he said. “I’ve made a bunch of mistakes in my 40-something years boating here, and if I can save someone from making those same mistakes I’m happy.”

That includes teaching his son, Kai, who last October began sailing Hobie Cats with his dad. They’ve only sailed two regattas but they dominated the class on both occasions, one of which was the 2010 St. Thomas International Rolex Cup Regatta in March.

“We went out there with three achievable goals,” he said. “Goal-setting and setting achievable goals are important. We wanted to start and finish every race, keep the mast up, and have fun. And by keeping it fun, we won every race. And I’ll tell you, going upwind in the Rolex with my kid on the wire, and he turns to me and goes ‘Dad, I love you, this is awesome,’ that was one of the best moments of my life.”

I had one final question for this permanent Caribbean boater, before he went out with his youth sailing class – his own effort, as he says, to “get ’em off the X-box and onto the water.” What does he love most about sailing? He smiles.

“Sailing is so challenging physically and mentally, it’s like playing chess with oversized pieces and then someone shakes the board every now and then when the wind shifts. It’s an art. It’s unique to every person. People can find all different ways to do the same thing.”

Andrea Bailey is a recent graduate of the College of Liberal Arts at Georgetown University, Washington, DC and a former collegiate sailor who has returned to her home island of St. Thomas.

The VIPCA first Spring Yacht Show, will showcase USVI-based crewed charter yachts to brokers as well as the beautiful waterfront