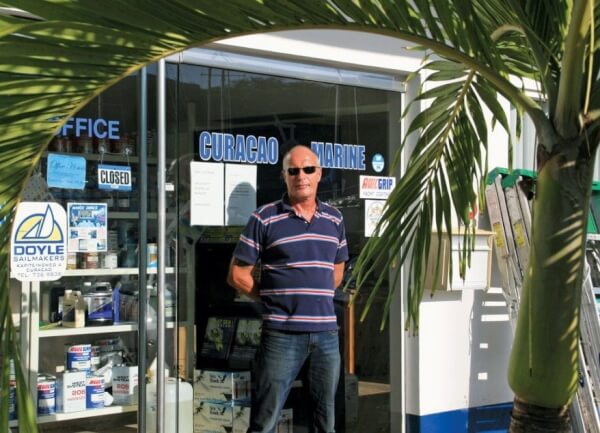 You instantly know that someone likes what they do when their professional and playtime pursuits are very similar. Plus, it’s certainly a vote of confidence if this same person is the owner of the boatyard where you plan to get your yacht repaired, rebuilt or refitted. Enthusiasm and experience are two words that aptly describe Pierre Verbiesen. Verbiesen is the owner of Curaçao Marine, a 25,000-square meter boatyard located on Schottegat Harbor, in the island’s capital of Willemstad.

For Verbiesen, life on boats began at the age of 15, when his father bought a 12-meter motor yacht. Born in Rotterdam, in the Netherlands, Verbiesen and his brother helped their father to finish the boat and the trio enjoyed short trips to the south of Holland and longer vacations when time permitted. He later served in the Dutch Army and earned his Green Beret, then had an opportunity to work on the Oosterschelde, one of the largest sea defense/dike systems in the Netherlands.  His jobs here ranged from rigging to boat handling. Afterwards, although Verbiesen liked sailing on big commercial vessels, he took the advice of his father to attend Dredge Master School.

“I am happy now that I listened to my father because dredging to me is more challenging than just running a boat from point A to point B,” he says. “With dredging there was never a dull day. Plus, as a dredge master, I got to work all over the world”

After 16 years working as an expat Verbiesen decided to spend more time with family. His brother-in-law lived in Curaçao and Verbiesen joined him to start a small yard. The two soon realized that the facility was too small for their goals, applied to the Dutch government for funding and started developing the new location, which is the present day Curaçao Marine. In the last several years Curaçao has proved a popular location during the Caribbean’s hurricane season.

“We are below the hurricane belt with a dry climate. It’s also safe here and there are good flight connections,” Verbiesen tells. “We started with mostly sailing (cruising) yachts, but see more motoryachts from the islands and Venezuela now. More and more people are finding us and this resulted in a full yard this year.”

Curaçao Marine is a storage and maintenance yard. Work here includes everything from the repair of wooden masts to the complete repair and renovation and repair of older yachts.

New, is an on-site meeting place. The need for this grew out of the popularity of the free monthly BBQs Verbiesen has hosted for the yard’s customers. The new meeting place is fitted with a 70-inch screen Cable TV. Other new additions include a 60-ton boat trailer, a Facebook Page and regular newsletter.

“Curaçao Marine cannot expand anymore in size, but we can update it and make it better for our customers,” says Verbiesen. “Maybe later, if the government starts the ‘GreenTown’ plan, we will be able to start a second marina and yard in Annabay, Willemstad.”

Green Town Curaçao in a sustainable, environmentally-friendly initiative to replace the island’s oil refinery with a ‘green’ city district around Willemstad harbor.

In the meantime, what Verbiesen enjoys most during his time off is working on the repair and restoration of his 1965-built 65ft aluminum Long Range trawler which he bought four years ago.

“I didn’t anticipate the time I could spend on it, but I do enjoy working on it. I am keeping the outside classic and will be making the inside like a modern day megayacht.”