ALL AT SEAThe Caribbean\'s Waterfront Community
HomeCruisePimples in Paradise
Cruise 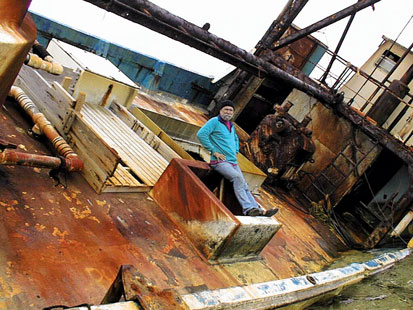 Bearing in mind I’m not a geologist, I want to talk about pimples and landless Pacific atolls. Yes, pimples. You have pimples. I have pimples. And the earth’s crust has pimples.

Here’s how it works: sections of the earth’s crust (plates) have weak fissures. Tremendous force builds under them, they erupt, and molten lava shoots out.

They might erupt loudly with great force and effect—or just a tiny bit each day. Regardless, this is how volcanic islands are made.

Now if you look at the Lesser Antilles or, say, Hawaii, you’ll notice that the separate islands are in an arc.

Because the plates move and the same ‘eruption’ is now in a different place, millions of years later.

All this is pretty simple stuff—just hard to notice because it doesn’t happen every five minutes but every five million years. What cruising sailor can remember such stuff—especially when the rum is so cheap? 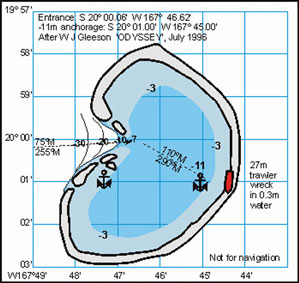 Anyway, when a volcano blows its stack, there is a huge dome of lava under it, buoying it up. Over millions of years, as the tectonic plates shift, this dome of lava goes away.

And the island begins to slowly sink—let’s say a sixty-fourth of an inch a year.

Yeah, sad. But not tooooo sad because, if it was ringed with a living reef, the reef will grow faster UP than the island sinks DOWN—which is what happens in the case of landless atolls.

The island itself is long gone—well, it is 50 or 60 feet below the surface. But the reef is awash at high tide. Picture a mountain plateau fifty feet beneath the surface that is ringed with a living, upward growing reef—and you’ve got the mental image.

The Strange Reality and Obese Myths of Minerva Reef

Let’s use Beveridge Reef as example. It lies a few hundred miles east of Tonga. We’ve visited it many times for extended periods during various circumnavigations—in fact, I’ve written a number of books while there.

Beveridge is the perfect place for a sailing writer who wishes not to be disturbed.

I think of it as a small pristine lake in the middle of a large ocean.

Of course, waves continuously break over its windward edge—millions of tons of water pour in every few seconds during high winds and seas. All this heavy saltwater has to go some place, and it usually ‘blows out’ a section of the reef to leeward of the Tradewinds.

We call this the ‘pass’ and use it to enter with our vessel. In the case of Beveridge Reef, there is plenty of water (20 feet or so) in the clearly-read natural channel.

Yes, it is best to enter in the afternoon with the sun over your shoulder.

Thus you have a very magical, completely rent-free place for sailors—a tropical island without any land. Without any people. Without any cops. Without any cash registers. Yet with an endless supply of food.

Many boaters aren’t particularly interested. Why go somewhere you can’t even get off your boat without getting wet? Thus, most landless atolls (we’ve been to three of them) are empty of vessels.

We feel the opposite—we think of landless atolls as full of life (below the surface) while being totally empty of all the vexations of modern society. In essence, we find them to contain the magic of sailing offshore without the inconvenience of being underway.

Imagine being in the Garden of Eden (well, anchored just above it) and not being disturbed for months at a time.

Beveridge Reef is our still favorite, although North and South Minerva are marvelous as well.

Food? Toss over a hook—if nothing bites it within 30 seconds, throw away that hook—it is defective.

Love sport fishing? Just wrap a hook in yellow polypropylene and drag it through pass—each time you will get a mahi mahi, wahoo, or tuna. Be quick, though, because hundreds (actually, thousands) of lazy sharks will be watching to steal your catch.

I’ll never forget our first stay in 2000. Nearly every day of the initial six weeks, there was a whale calving within the lagoon—and all we had to do was stop and listen, 24/7, to hear them softly blowing.

We didn’t swim with them or approach with our dinghy—but we felt God-kissed by their presence.

It is a sacred trust.

If the baby whale started to get too close to Wild Card, its concerned mommy would gently steer it away.

Yes, we could hear them talking to each other through our hull.

What did we do all day other than fish? We lived! We loved! We dived. We laughed! The rest of the world receded—then faded. Carolyn sewed, cooked, and revarnished—while I spewed words, hundreds of thousands of words.

Did we ever grow tired of each other in Beveridge?

We were Adam and Eve in a watery Paradise, happily insulated from the vexation of the power-drunks ashore dressed in Brooks Brothers suits.

Clothes were optional—hell, everything was optional. We were masters of our own tiny universe.

Occasionally, another yacht would drop anchor for a day or two. If they’d anchored as far away as possible—we would not visit nor contact them on the VHF.

If they anchored within a sociable distance, however, we’d invite them aboard for dinner. I’d wait until Carolyn had her frying pan dancing with oil (that’s how she tests its heat) and then take their dinner orders—then catch whatever they requested.

Life was simple. And just. And romantic. We metronomed our lovemaking with the sun and the stars and the sky.

How did we do this without a watermaker?

First off, we had a saltwater sink pump—with an unlimited supply of ocean. Second, we perfected a method of dishwashing that used very little fresh water. Third, we bathed in saltwater and then miserly rinsed in fresh. Fourth, we collected fresh water off our Bimini (very clean) and our entire deck (in a separate, less clean tank).

Thus our standard three gallons a day gave us plenty of leeway, but if need be we could throttle back to a single gallon a day between the two of us until the next rain.

Looking back, our times anchored in Beveridge stand out as vivid gems of memory during our last twenty years of circumnavigating. Each day Carolyn would do her yoga. I’d do my push-ups, pull-ups, leg lifts, stomach crunches, and numerous other exercises. We would both swim—much to the amusement of the black tip sharks circling us.

If I didn’t have a pen in my hand, I’d have a guitar. Or Carolyn.

No, we didn’t turn on the SSB radio—why spoil the bliss? Somebody somewhere is always killing someone else somewhere for no good reason—why wallow or thrill to the inhumanity?

Each evening we’d lie on deck and look up at the stars. We’d listen to the earth spinning on its axis. We’d take little sip of air, careful to not hyperventilate. And we’d think how lucky we were to have each other and this precious time together—to do nothing and everything within each other’s arms. (end.)

Editor’s note: Fatty and Carolyn are currently exploring the small isles in the lee of New Caledonia.