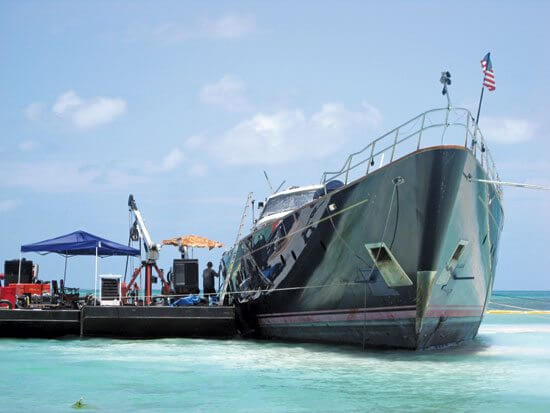 How S/Y Legacy wound up stuck in the tidal flats in the Florida Keys National Marine Sanctuary is a gripping tale that never seems to end. Since Hurricane Wilma tossed the 158-foot Perini Navi vessel into the federally protected marine preserve near Key West in 2005, owner Peter Halmos has spent millions of his own money to free his shipwrecked superyacht from the seaweed. Eight years later, Legacy sits very near where she was once, seemingly, hopelessly stuck as Halmos appeals his case against the insurance company over the boat’s agreed value policy.

Why did it take two-and-a-half years to drag a hurricane-ravaged megayacht back out the 5,000-foot track to the channel that Wilma blew it into, only to have it remain a mile from whence it came for more than another year?

Even the fictitious, half-wit Gilligan and the Professor could have rigged a coconut-conch contraption to rock the boat more quickly.

While Halmos searched for the Spanish galleon Atocha’s trove of gold bullion, Legacy became caught in a toe-curling hurricane that nearly killed him and his crew and actually planted his yacht with her keel stuck in mere inches of seagrass and substrate. Inches might as well have been a mile.

This bizarre, but true, tale has had every strange turn imaginable. Halmos’ odyssey is the harrowing tale of a boat owner who just wouldn’t quit in spite of catastrophic nautical inconvenience. Halmos battled heroically to free his shipwreck from inches of sacred seagrass. Yet the heralded floatation on Feb. 24, 2008, passed with all the fanfare of a damp cornflake. On her 851st day of captivity, Legacy left her entrenchment in Key West’s Calda Channel, unnoticed, while Byrd Salvage literally shifted critical mass, pulling her to freedom.

An Act of God

The yacht’s rigging collapsed during Wilma, crashing starboard onto the bridge. The yacht had 400 feet of line on the two main anchors and a midship anchor that allowed Legacy to swing 360 degrees with the winds. Then she lost holding. Halmos later discovered that the top and bottom parts of both main anchors had inexplicably separated – despite being American Bureau of Shipping classed with their annual survey completed only months earlier.

“The anchors didn’t drag, they split in two,” Halmos says, displaying the chains and what’s left of the anchors. “Both anchors came apart in the same place.”

As Legacy was dragged out to sea, the waves grew to 25 feet. Incoming water forced the crew to shut down power. Halmos wasn’t sure if they would sink from the water coming in, flip or fall apart, but the steel hull held. This nightmare lasted hours until the yacht was dragged over the tidal flats, hitting ground with tremendous impact followed by shudders. The fallen rigging was a godsend, the weight slowed Legacy’s progress to sea just long enough for the hurricane to pass. Then the winds turned and blew the yacht into the safe, shallow waters of the Sanctuary.

When she finally stilled, the yacht was completely upright. In the morning’s 60-knot winds, unable to see land or the sea bottom, Halmos taped a hammer onto a PVC pole and lowered it into the water to check the depth. The hammer fell off and stuck upright.

“That’s when I knew we would make it,” Halmos says. “The act of god wasn’t Wilma. Legacy was gently placed upright and everybody’s safe. To be in the sand and sitting upright, there is no explanation for that.”

Halmos, 70, is a non-attorney partner in a Washington, D.C.-based law firm. He dons a T-shirt and shorts, barefoot with a broad brimmed hat sheltering him from the Keys’ harsh rays. He applies sunblock constantly, especially lip balm. It’s bright white and outlines his lips with a Ronald McDonald caricature likeness. His eccentricities include his individual crusade to right the world’s wrongs.

That sounds like suave rhetoric for being litigious, but Halmos put depth behind his convictions, grabbing an old, worn copy of Aesop’s Fables, the moral ditties written by a freed, Greek slave in 600 B.C. As he thumbed its weathered pages, I could tell he’d read the book over and again.

“When you violate one person’s rights, you risk violating everyone’s rights,” Halmos says. “People understood this 3,000 years ago. A slave had no rights, but everyone’s rights are worth fighting for, for everyone, not just yourself. Unfairness and injustice is probably the cause of most every human adverse conduct.”

“People go along with unfairness,” he continues, “because it’s in best their interests. If I can’t satisfy my interests on my own merits without being unfair to anyone, I deserve to have my interest dissatisfied. What if it happened to you? It’s not something to turn your back on.”

A custom-made pump developed by Byrd Salvage sliced an 11-foot hole underneath the yacht. Dragging the boat out was the third plan approved by the Natural Resource Damage Assessment and Restoration Division after tedious negotiation with the National Oceanic and Atmospheric Administration to reduce environmental impact and liability.

“The pump’s high-pressure water jets combined with its remote-controlled movement surgically ‘cut’ the seabed rather than sucking with brute force. Think laparoscopy as compared to a hatchet,” says Halmos.

Two 80-ton rated pull cables from Byrd Salvage’s Helen B barge led her to free water. Byrd’s prototype submersion pump excavated and deposited sand/mud substrate in the trench directly aft of the yacht as she was pulled. A hose connected to the pump’s dome routed the substrate to a ‘parking’ area.

When Legacy was removed, the substrate was pumped back, refilling the hole in leapfrog fashion. Miles of turbidity curtains skirted the operation so sediment wasn’t distributed over the seagrass. Halmos fronted the removal costs, which ran about $1.5 million per month.

For six months, Legacy was dragged for one mile into the Gulf of Mexico’s open waters to the entrance of the Northwest Channel, then into Man O’ War Channel. Basically, she made a huge loop two miles from where she started.

While the vessel may be free from the mud, she is now entangled in legal wrangling with the insurance company.

Halmos sued Insurance of North America for not paying all his claims and lost. He appealed, requested a jury trial and lost. At press time, Halmos filed a request to rehear with the 11th Circuit Court and says the last step is the U.S. Supreme Court. As he bangs out e-mails to his army of lawyers, Halmos lives on his beloved and partially refurbished boat, which is once again habitable.

“The more I spend on Legacy, the bigger the problem,” Halmos says. “On one hand, the insurance company wants to cut their exposure and not pay another cent on Legacy, and they also want to argue that they own her. It’s diabolical. That’s why she’s still sitting there. I can’t move her.”

“The insurance company knew in October 2005 that the cost of repair was over $16 million (the value of the policy) and that she was a total loss. I said, ‘Give me a check, but they didn’t.’ Three years later, they admit what they knew three years earlier,” Halmos growls.

Halmos says the insurance company earned $4 million in interest during the three years they avoided paying Halmos’ $16 million policy, one that he had tried to increase the value on prior to Hurricane Wilma due to warranty work, a third set of sails, and other work that increased her value. The yacht originally cost $14 million.

Representatives from ACE Insurance Company, a Swiss holding company headquartered in Bermuda that is the parent company of INA, did not immediately return calls.

Halmos’ latest set of appeals for a jury trial is his sixth such request after enduring a bench trial by the magistrate who became both fact-finder and mediator. Halmos’ appeal claims his lawsuit was never filed in admiralty court but still wound up there. He also argues the vessel’s agreed value policy and what actually constitutes the bitter end of a salvage operation.

In the bench trial, INA counterclaimed and prevailed that the vessel’s insurance policy coverage was invalid in the first place after already paying Halmos several million in removal costs.

The magistrate said Halmos committed fraud by failing to disclose an aged list warranty claims sent to Perini Navi that were benign to the issue of seaworthiness (i.e. paint blistering/fairing problems allegedly resulting from the manufacturer not following the specifications). These gripes to the manufacturer, according to the magistrate, purport Legacy to be unseaworthy – in spite of the vessel having been thoroughly inspected by the insurance company surveyor who then raised her coverage by $2 million before Wilma.

In addition, INA proved successful in its counterclaim to not pay salvage costs once Legacy was movable via tow, in spite of the fact that damage to her downed keel, collapsed rigging and three year deterioration in the mud rendered her inoperable under her own power to really get out of harm’s way and avoid hitting submerged pipelines in a protected area.

He says the insurance company only keeps a certain amount of coverage and then reinsures with another company who’s calling all the shots – a company with which you have no contract.

1) “The first thing is to assume you’re going to get screwed,” Halmos says. “Don’t believe their [insurance company’s] crap. That ‘we’re here to help you and are on your side’ is all bull.”

2) The second thing is to hire a lawyer right away.