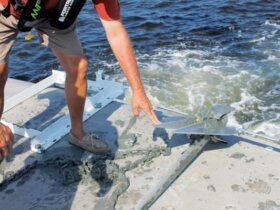 Best Anchor for Mud of the Chesapeake Bay?

As early as the 1930s, new locks were proposed for the Panama Canal to ease congestion and to allow larger ships to pass. On October 22, 2006, a $ 5.25 billion plan to expand and modernize the canal was approved by Panama voters. With a symbolic blast, physical work started on September 3, 2007 as an estimated 30,000 people joined the Panamanian government and Panama Canal Authority (ACP) in a groundbreaking ceremony at Paraiso Hill.  Expansion of the nearly 100-year-old waterway, scheduled for completion by 2014, will double its capacity.

Since the 1999 handover from the United States, the Panama Canal Authority (ACP) has begun shifting the Canal’s operations from a profit-neutral utility to a market-oriented business model focusing on customer service and reliability. Among 23 modernization action points were widening of the Culebra Cut, a narrow portion of the canal, to at least 192 meters along straight stretches and 222 meters in the curves.

This initiative allows the canal to meet growing transit demands by increasing the waterway’s operating capacity and allowing for more flexible traffic scheduling. It enables two “Panamax” vessels to transit simultaneously in either direction without compromising navigational safety.

Furthermore, the Gatun Locks fire fighting system has been upgraded and a state-of-the-art simulator for enhancing the training of ACP pilots, tugboat captains, seamen and launch operators has been established in a new Simulator Center. The ACP also increased and improved the telecommunications network and the locomotive fleet: Mitsubishi locomotives, known as “Mules,” have been upgraded and renewed over the past several years. The new 55-ton locomotives have 50 percent more towing power and a faster return speed than previous models, and may reduce the time vessels spend transiting the locks.

Meanwhile, plans in the pipeline for a significant expansion that would allow vessels bigger in size than the “Panamax” ships to make use of the canal, took shape on the drawing tables in the historic administration building. In short, there will be a new lane built along the Panama Canal through the construction of a new set of locks, which will allow more traffic and longer, wider ships.

A Panamanian pilot, Carlos, told me (during a night transit from the Pacific side) that each day, more than 40 ships follow in our track or vice versa, chock full of cargo. On the Atlantic side, most vessels carry grain, while ships from the Pacific side are usually stowed with cars and electronics. About 14,000 vessels, carrying five percent of the world’s ocean cargo, pass through each year. Despite the 24/7 operation, there is a struggle to keep up capacity. Big ships with daily operational costs of more than $40,000 could be waiting as long as a week for passage. The “traffic jam” shows how integral the canal remains to global shipping. A massive breakdown could be devastating.

By 2011, post-Panamax vessels could represent 37 percent of the world’s container ships. Panama can’t afford to let the canal miss the boat. The project will include two sets of single-lane three-step locks, one bypassing the Miraflores locks at the Pacific side and one adding to the Gatun Locks in between the Gatun Lake and the Atlantic Ocean, and two new navigational channels to connect the new locks to the existing channels. Deeper and wider versions of the existing shipping lanes are also needed.

Dry excavation has begun, as can be seen on the canal’s webcam. Work on the new locks will start this year. Although they will be 65 percent larger than the current locks, the new design incorporates recycle basins. Currently, each transit flushes about 52 million gallon of fresh water, enough to supply a city of 250,000 people, into the oceans on both sides. The canal requires on average more than two billion gallons per day to fill the locks for passing ships. An expansion plan with the traditional design would have doubled the water consumption. The new design, after a German example, will use seven percent less, thanks to the triple water-saving basins.

About 130 million tons of rock and soil will be excavated over the next seven or eight years to reach the intended capacity to keep up or improve the actual 14 percent of the nation’s gross domestic product. But it’s more than just business. The canal and its improvement is a symbol of the pride of the Panamanians.

The bi lingual (English and Spanish) pancanal website links to five webcams which show operations at the Miraflores & Gatun Locks, as well as other points of interest like the Centennial Bridge and the expansion site in the Canal. The website also provides notices and advisories to the maritime industry, which, if read and carried out, can substantially shorten the waiting time of vessels that are bound to cross the canal. www.pancanal.com.

“The waterway’s expansion continues to move forward according to plans, and we look forward to the successful execution of this important project," ACP Board of Directors’ Chairman, and Minister for Canal Affairs, Dani Ariel Kuzniecky said on November 15, 2007.

An increasing number of container ships and other vessels are too big for the canal, referred to as post-Panamax. The new locks will accommodate 1200-ft long post-Panamax ships displacing 170,000 tons with a maximum load of 12,000 containers (12,000 TEUs = 12,000 Twenty-ft Equivalent Units). The current maximum capacity is 5,000 TEUs.