Panama: Atlantic to Pacific with the Corina IV

Approaching Panama, the winds tend to die and the sea becomes still, even glassy. This is what we experienced 60 miles off the Panamanian coast after three days close hauled from Jamaica. The winds had been south of east the whole way, turning this supposed ‘easy wind on the beam’ sail into a close reach with the winds just off the port bow. Even so, the crisp 20-25 knot winds kept us going at a steady eight knots and allowed us to make the 570 nautical mile transit in three days.

The coast was hidden in haze and the first things we saw were the huge silhouettes of ships from all over the world. Tankers littered the horizon and provided some fun as we maneuvered to avoid them as they held their course without a care in the world. When approaching the breakwaters of Colon, it is essential to not only follow the rules of the road and keep to starboard, but preempt the entry or exit of one of the many ships trying to make their way in and out of the harbor.

The anchorage for yachts at Colon is known as ‘The Flats’ and is marked by yellow buoys located just south of the large Cristobal Container Terminal. If you do not want to sit at anchor or need to get anything done without too much hassle, Shelter Bay Marina is your only option. In the past there were a few other docks available including the Panama Yacht Club, all have now been disbanded. Shelter Bay has everything a cruiser needs and at competitive rates. The pool and one dollar beers were a treat after being at sea! We decided to hold up here for a few days and sort out the canal paper work and get a few things done including picking up the last two members of our crew.

After securing to the very nice floating dock in Shelter Bay we were given the contact details of Erick Galvez, recommended as a trusted canal agent. Galvez was definitely on the ball. We met the next day, submitted our paperwork, and within two days had a spot in the canal. All customs and immigration is done on site by an officer who comes to the marina in the morning and works from a small office behind the marina complex. All other documentation including cruising permit, zarpe, and possibly visas will be done through the agent. All of this is of course possible without an agent but if you are one who can’t stand the hassle or, like us, are tight for time, then I recommend you spend the $350 in agent fees.

As for Colon, this interesting hub of Central American commerce is a great experience but in small doses. Personally I would not want to spend days hunting down the official documents and signatures needed to obtain canal clearance. That said, the city offers almost everything one could want. You just have to find it! It is best to fill your propane tanks here as well. If you are in Panama City, you have to hire a taxi driver to take them and fill them for you. We made this mistake but luckily there were many other cruisers with the same problem, so together it was more than feasible.

If you are preparing for a long voyage, Panama is definitely the place to stock up. A wide range of foods can be found in Colon or Panama City. Alcohol is very cheap and, even with the tax, gives St. Maarten a run for its money. Diesel is best bought in Panama City. We paid $3.66 a gallon from a fuel dock, so no need to carry jerry cans to a fuel station. All this was accomplished at the Balboa Yacht Club in Panama City.

Directly before the first lock, on the Pacific side, lies Balboa. This is the only secure place for cruisers to leave their boats long or short term. They have moorings and a tender service to shore. These are paid by the day per foot. Apart from that there are two other anchorages available on either side of the Amador causeway. One is in the south cove, however, the swell and tides make it uncomfortable at times and one has to pay to use the dinghy dock. The other, more protected anchorage, lies on the north side past the fancy Flamenco Marina but this can be very hot and the dinghy dock is very sketchy. We tried both anchorages for a week and then decided to tie up at Balboa for peace of mind and to be closer to the city.

In terms of yacht repairs and spare parts, I was amazed at how little was on offer. We needed a new Volvo dripless shaft seal and after two weeks of hunting around, including visits to the Panama Volvo dealer, we had one sent from St. Maarten, which arrived in two days. There are many hardware and automotive stores where you can buy tools and general supplies but anything ‘boat’ specific is a problem. Ordering parts from the US (or St. Maarten, we use Budget Marine) and having them couriered is the best option for price and time. Do not expect local expertise unless you own a sport fishing boat.

Editor’s note – In June 2013, Max Loubser, Laura Bijnsdorp, Kippy Gilders, Alex Nebe and Maria Merkens, young friends who grew up together on St. Maarten, boarded Corina IV, a Beneteau Oceanis 52 loaned to them by former St. Maarten businessman Allard Stamm, and set off to sail around the world. Currently they are heading for South East Asia. 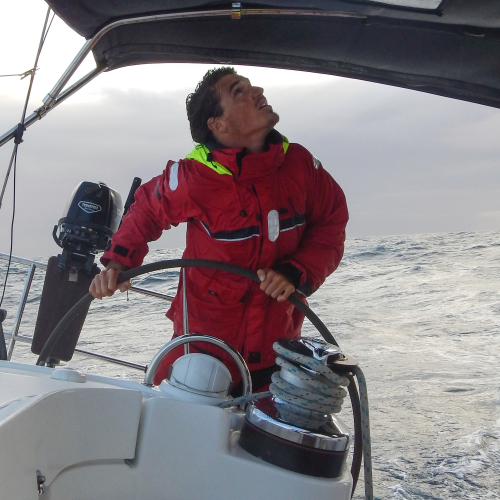 Capt. Max Loubserhttp://www.readysetsailnow.com/
Max Loubser is the Skipper of the Corina IV. Originally from South Africa, Max grew up in St. Maarten on the Beneteau 44 Callaloo. He studied at UK and Florida-based maritime academies and works as professional yacht crew.
RELATED ARTICLES
Cruise