The Oyster World Rally may have set off from Antigua in January but the British company’s burning desire to make sure their other customers in the Caribbean region are enjoying themselves has not diminished.

The Oyster Regatta in Grenada was a highly enjoyable blend of yacht racing brimming with sportsmanship and exclusive parties at locations to die for. The ‘home’ of the Oyster Regatta Grenada was Camper & Nicholsons’ Port Louis Marina, Grenada. Nineteen Oysters – including four impressive Oyster 82s – enjoyed the fabulous facilities of Port Louis, which must have some of the friendliest staff anywhere in the Caribbean.

Grenada recently had a change of government and it was encouraging to see that two ministers attended the opening party at Mount Cinnamon. After an electrifying performance by the Tivoli Drummers, Oyster CEO David Tydeman introduced the guests of honour for the opening night. Minister for Foreign Affairs, The Hon. Nickolas Steele and Minister of Tourism, Civil Aviation and Culture The Hon. Alexandra Otway-Noel. Minister Steele, an avid sailor, was delighted to accept an invitation to race with the Oyster fleet during the Regatta. The Oyster family enjoyed a sumptuous barbeque supper of traditional Grenadian dishes accompanied by one of the island’s finest soul singers, Jenny Jeremiah.

Racing at the Oyster Regatta Grenada got off to a fantastic start with an adrenalin- pumping passage race to Le Phare Bleu on the rocky south coast, sponsored by Dolphin Sails. The trades seriously kicked in providing over 25 knots of deep blue Caribbean surf.

I was fortunate enough to hitch a ride on Hilton and Louise Nathanson’s Oyster 82, Mathilda Sound. The couple had never raced before and, for their debut, were joined by their two sons, Oliver and Tate and accompanied by Oyster’s Klaas Meertens and his son, Damian. Hilton steered all day but gave the honour of crossing the finish line to Damian Meertens. Oliver Nathanson caddied on the mainsheet, whilst Tate was in charge of furling the headsails. With three crew aged 12 or under, Mathilda Sound was a youthful affair but all three youngsters concentrated dutifully on their tasks. Watching these youngsters get into sailing with their parents reminded me of what a fantastic sport sailing is: three kids really enjoying a day with their parents and not a computer game in sight!

Racing at the Oyster Regatta Grenada continued with glorious conditions for the predominantly downwind passage race back to Camper & Nicholsons’ Port Louis Marina, sponsored by Pelagos Yachts. Clear blue skies and 15 to 20 knots of south-easterly breeze provided a sublime reach back to Grenada’s capital, St Georges. The Oyster fleet was a magnificent sight, gliding elegantly downwind with colourful spinnakers reflected in the crystal blue
Caribbean water.

After racing, a cocktail reception at Camper & Nicholsons’ Port Louis Marina hosted by the Marine & Yachting Association of Grenada was followed by a fabulous night at the La Luna Resort. Tucked away near Morne Rouge Bay, the award-winning designer resort has been the secret hideaway of the rich and famous for the past 14 years. The owner Bernardo Bertucci, a self-confessed fan of Oyster Yachts, ensured that a fantastic time was had by all. With a lay day the next day, the party went on long into the night.

After a day of relaxing on the beautiful beaches of Grenada, the Oyster fleet returned to racing action with a tight and tactical triangular course just outside Port Louis Marina, sponsored by Lewmar. The penultimate party venue for the Oyster family was the unique tropical Aquarium Restaurant on Magazine Beach. After enjoying a few sundowners, the seafood barbeque included delicious local lobster and a freshly- sliced ham carvery, all served by friendly staff.

Racing was very competitive but Oyster Regattas are not only about racing, the occasions are ideal for families and friends who want to enjoy exclusive occasions in some of the most awe-inspiring sailing locations in the world and that was most certainly well achieved in Grenada.
For more information: www.oysteryachts.com

Louay Habib is a freelance yachting journalist. For the past twenty years, he has competed at yachting regattas and offshore events all over the world. Louay writes for a variety of clients including the Volvo Ocean Race and the Royal Ocean Racing Club. 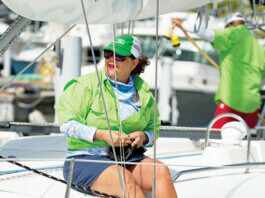