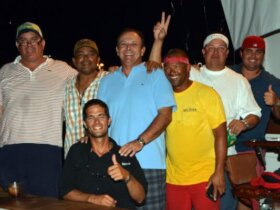 One-design racing is on the rise throughout the Caribbean. The Laser is one of these classes of boat that is thriving as witnessed by nine island nations boasting membership in the International Laser Class Association (ILCA).

Emma Paull, office manager at Conch Charters in Tortola, BVI, and past winner of four Caribbean laser sailing championships, says, “Laser sailing in the Caribbean is pretty big with Opens and having youths and adults taking part.”

Focusing in on where Laser sailing is hot, Geoffrey Pidduck, district representative to the ILCA from Antigua, adds, “While the Laser Radials and Laser Standards were fully subscribed to at the Caribbean Dinghy Championships held this summer in Barbados, interest appears to be strongest in the BVI, USVI, St. Maarten, Antigua and Martinique, and to a lesser extent Trinidad.”

ALL AGES MARK A GROWING CLASS

Laser sailing has a broad range of enthusiasts. Kim Jones, who with husband Rob organizes the VI Laser Championships each fall on St. Croix and whose Jones Maritime Co. is a Laser dealership, says, “With the addition of the 4.7 rig, you’ve got a boat that covers the whole family with one hull.

“In the Virgin Islands, we have active Laser sailors that range from age 12 to 54,” she adds. “Since the Virgin Islands Laser Association was formed three years ago with eight members, it’s grown to 68 members. This number guarantees us a single spot in international Laser events.”

Growth in the Class has come in the Laser’s role as a graduation boat for age- or sized-out Optimist sailors. St. Lucia’s, Lily Bergasse, administrator of the St. Lucia Yacht Club (SLYC) Dinghy Sailing Program, says, “Our season ended in July with 19 sailors. In September, we had a membership drive which increased our numbers to 32 children ranging from age seven to 16 sailing Optimists and Lasers.”

The BVI’s Paull says, “We have about 12 to 20 active sailors that come racing on a regular basis at the Royal BVI Yacht Club. But when you include the sailors in the after school programs, KATS and the private boats that just go for a sail—there are far more.”

Frits Bus, an avid Laser sailor and organizer of the Caribbean Laser Championships, held in St. Maarten each year, reports, “We have about six active sailors that are racing and about 10 sailors that sail for fun, including our youth sailors.”

Many yacht clubs and youth sailing programs throughout the Caribbean incorporate the Laser. With the three rigs, says Paull, “the Laser is a great boat for youth training programs as you can change the rigs to fit the class size and the wind. At the Royal BVI Yacht Club we use all three rigs for beginners to racers of all ages. KATS just uses the 4.7 rig for its beginner program and then they encourage those in their final year to come and join in the race training at the RBVIYC.”

In St. Lucia, Bergasse says, “We presently have two dedicated Canadian instructors with us, Andrew Thomas from New Brunswick and Tony Earle from Ontario, who are training the children in both Optimists and Lasers. We offer Laser intermediate and advanced classes and from 9 a.m. to 5 p.m. on Saturdays the beach outside the SLYC is filled with dinghies, a volleyball net for on-land training and happy children. Our Laser advanced class also trains on a Friday afternoon.”

Tortola’s Paull says, “We in the Caribbean should be pooling our resources more to bring top coaches into the islands and run training camps for more of the top sailors. When you sail, you are constantly told to get your head out your boat. I would say that works for developing sailing in the Caribbean. That is, get your head out of your own program and look how you can help others develop as well.”

Paull adds, “I would really like a travelers program in the Caribbean for the Optimist and the Laser, overseen by the Caribbean Sailing Association with each country taking part. It would be great exposure for one of the major Caribbean chandleries or other island wide companies.”

The popularity and attendance at Caribbean Laser regattas has suffered and surged over the years. Antigua’s Pidduck says, “The Ladies Laser Open and the Caribbean Laser Team Championships, both usually held at the Antigua Yacht Club since 1989, have sadly had lack of support recently from other islands and have been cancelled. The Championships have been offered to other yachts clubs in the region.”

Pidduck adds, “It was disappointing to me as a Laser sailor, who has owned 34 of these boats over the years, to see this year’s Caribbean Laser Championships in St. Maarten record the lowest turnout in years. I believe they had only 18 sailors.”

In the last few years, says the USVI’s Jones, “there are two Laser specific events hosted.” One is the St. Thomas Radiology Women’s Sailing Regatta and Tennis Tournament, set for November 10-12 on St. Thomas. The other is the V.I. Laser Championships, scheduled for November 24-26 on St. Croix.

Participation in the Laser Class at the BVI Spring Regatta, set for March 25 to April 1, has grown and is expected to continue growing substantially as it enjoys recognition as an ISAF graded event.

In 2008, the Laser Radial will replace the Europe as the Women’s One Person Dinghy in the Summer Olympics in Qingdao, China.

St. Maarten’s Bus concludes, “I think the Laser has a great future, especially now that the Laser Radial is an Olympic Class boat and the 4.7 seems to be really taking off.”

Many Caribbean sailors have made their marks on the international Laser sailing scene:

BVI: Robbie Hirst, represented his island in Laser Standard at the 1996 Summer Olympics.

St. Lucia : Michael Green, represented his island in Laser Standard at the 1996 Summer Olympic Games and has won the Laser class at the Caribbean Dinghy Championships and Caribbean Laser Championships in St. Maarten.

St. Lucia : Rising star and teenager, Frederic Sweeney, finished in the top half of the fleet at the North American Championships in the Laser Class, held this summer in Nova Scotia.