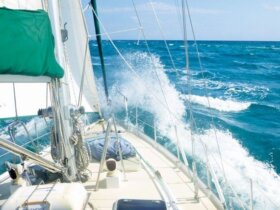 What Would You Do if Your Engine Failed?

I’ve had an intimate relationship with all the boats I’ve owned. Some of the shorter ownerships were more like dating. I’ve dated a lot of boats. OK, I admit it, I suffer from boat infidelity. In fact, I’ve never met anyone worse off than me when it comes to being a fickle boat owner. How do I know this? Well, I’ve owned 50 sailboats!

It now seems hard to believe and while thinking about it I realized that I had trouble remembering them all, so one day I sat down and wrote a list. I can’t even remember all their names, which is bad … kind of like a rock star trying to remember all the women with whom he’s slept, but I certainly recall some of the most memorable.

After a succession of sailing dinghies and daysailers, my first cruising boat was an old woodie that leaked so badly that she needed to hang in the slings with gas driven pumps running all weekend each spring before she would float on her own.

There was the Luders cold-molded sloop, which I bought cheap when the previous owner’s electric sander went through the hull while he was using it, leaving a three foot hole. I can fix that, I thought. And I did.

Before I knew any better and still lived in the frozen north (called the Midwest), I owned a little trailerable Balboa 20. She was my first plastic boat and I wasn’t impressed. Beating through Lake Michigan’s ‘Death Door Passage’ one cold and blustery day, with the bottom flexing half-a-foot as we fell off each wave, made me want something bigger and sturdier.

Next, I bought a Rhodes 28 that was half full of water and had a spongy deck. It was simple to fix and I had some great sailing on her, but I decided it was time to do some real cruising and felt the need for something bigger.

Along came a Morgan Out Island 33. Not the prettiest boat but nearly new and my mate at the time said it was the smallest boat she could live on. It was also the biggest one I could afford, so that was convenient and on that boat I finally made my escape from the land of ice and snow.

In Florida I fell in love with a little Mariner 31. Never mind that it had no engine or fuel tank and needed an entirely new deck. A few months of hard work and that boat brought us back north to Annapolis where two of my children were born.

Now with a tiny baby, we somehow ended up with a bank repo Roberts 45 ketch that caused my mate to cry when she spent her first day alone aboard but, after two years of hard work, became quite valuable. I realized though that it would be years before I could afford to go cruising on it, so I sold it.

There was a Westsail 32 that we finished from a nearly bare hull and on which another child was born. Once again we sailed away from the cold and cruised to 19 countries with my troupe of little kids aboard. Returning from that trip, I sold the Westsail, which later went on to round Cape Horn and win one of the Bermuda races in her class.

I now had a succession of boat dates: sailing dinghies, daysailers, small and large cruising boats; none of which I really bonded with.

Then along came a Colin Archer Ketch. I bought her as a derelict in an industrial boatyard near Baltimore with vines growing over the rotting deck and bees living in the bowsprit. She was beautiful! I rebuilt her, sailed her to nine more countries and sold when it was time to go back to work.

A succession of interesting but ‘not quite right’ boats followed including a Wauquiez 43 (I have a fear of heights), a couple of Morgans; a 416 and 46, both of which I owned at the same time, keeping one in Florida and the other on Chesapeake Bay. Then there was a Downeaster 45 schooner that brought me back to the Caribbean, and which I have missed ever since. She was followed by a fabulous 58ft schooner named Kai Kanani. I sold her to downsize ahead of a world cruise but after buying and outfitting a Corbin 39, along came an English woman with four kids who wanted to go cruising too, so I sold that boat and bought a 64ft steel brigantine with room for all the children. We sailed the brigantine to 11 countries in the Caribbean and the Pacific, but eventually the lady left and took my crew with her.

Finally I meet a real sailor lady. By then, all the kids were grown and had jumped ship, so I sold the brigantine and bought a Westsail 42, however, my new lady just never bonded with it and it was sold. Now we are on the lookout for yet another boat for still MORE cruising …

I should probably seek help. I realize that. But I’ve had a blast playing with all those boats. I guess you could call me a ‘sailboat playboy’. Looking back, I know all my boats had their good and bad points. Some I wish I had never sold, others I wish I had never seen. I also know that there is no perfect boat but that I will probably keep on searching for it anyway ‘til the day I die.

Tags: How to Buy a Boat