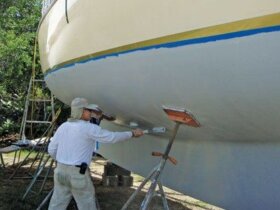 Fixing Small Blisters at the Waterline

Being the first to release five blue marlin in four days of fishing earned the team aboard the 30ft outboard, Mur Mur, the top prize in the 51st Port Antonio International Marlin Tournament (PAIMT). Twenty-four boats from Jamaica, Haiti, Canada and the Netherlands competed in the September 27th – October 4th tournament fished out of Di Ole Marina, Port Antonio, Jamaica.

Canadian brothers and Mur Mur owners, Michael and Christopher Habib, entered the tournament for the first time with a pick-up local crew from Montego Bay. Their collective karma was definitely hot! Mur Mur led straight out of the gate on day one when Michael Habib released the first fish of the tournament. The team’s lucky streak continued right into the winner’s circle with a total of six blue marlin (one disqualified as not a proper release), plus a 16lb dolphin and 18lb tuna.

“It was like Davy and Goliath, us being on a small boat compared to the other boats,” says Michael Habib. “We were the little midget that whopped the giant. We’ll definitely be back!”

The other big story from the 2014 PAIMT was angler David Levy’s last day catch of a whopping 510lb blue marlin, from the 52ft Hatteras, Diana.

“It was two hours and 40 minutes of team work,” says Levy. “The first time it jumped we saw the size of it. It was a good sized fish. We couldn’t have had a better day compared to last year when we got three bites and missed them all. This year, we lost one on the third day, then we had a knock down on the last day followed by the big girl.”

The big blue marlin was given to the host Sir Henry Morgan Angling Association, who sold it with proceeds donated to charity.

Numerous non-billfish such as tuna, dolphin and wahoo came to the scale, but qualified only for heaviest specie-specific prizes and trophies.

Other tournament festivities included nightly parties, a canoe tournament for local fishermen on the marlin tournament lay-day, and a Lion Fish Cook Off where local schools and restaurants participated.