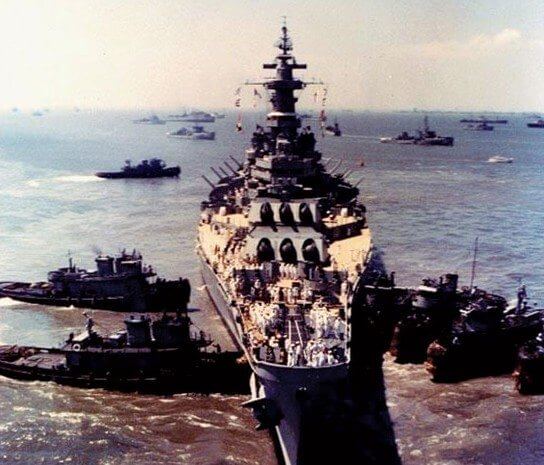 The battleship USS Missouri (BB-63) was one of three of the last warships to be built in the battleship era. She was decidedly one of the most powerful – nine 16-inch guns, 12 secondary, 5-inchers, and too many 40- and 20-millimeter anti-aircraft guns to count. She was big – nigh on 900-feet long – fast, cruising at around 33 knots, and had an exceptionally long range of 15,000 nautical miles. The German Bismarck, the HMS Vanguard of Great Britain and the Japanese Yamato were big, powerful ships in their own right, but did not compare to the Missouri in that most subjective of categories. She was the most beautiful of them all, said to be President Harry Truman’s favorite ship.

The Mighty Mo never once fought a major ship-to-ship battle, but she saw plenty of ship to shore action, bombarding coastlines in WWII, Korea and the first Iraq War.

In early January 1950, she was leaving Norfolk with her usual complement of crew, en route to the Atlantic. The channel from the Naval base in Hampton Roads out past Thimble Shoals and on towards the mouth of the Chesapeake is well buoyed, and was indeed well-known to the crew. They had a planned run through a new acoustic range off Thimble Shoals on the way, and she steamed ahead around a consistent speed of 15 knots approaching the range.

Details of the buoyage for the acoustic range remain murky, but one way or another, the ship missed it, running aground on Thimble Shoals with so much momentum that she carved a 2,500-foot long channel in the mud and ended up resting hard on the bottom, a full seven-feet above her waterline.

The Department of the Navy took a close look at the situation and was ready to contract a private salvage firm to free the ship. However, a few of the powers that be, including Admiral Smith, at the time Commander, Cruisers, Atlantic, and issuer of the Missouri’s orders said that if they Navy got her there, they could get her off. The Pentagon relented, but made clear that the Admiral’s career was riding on the operation. He moved aboard the ship during the process, part of which included responding to the nearly 10,000 letters from people with their own ideas of how to get her free.

Everything moveable was offloaded onto barges, nearly all the fuel pumped out. Divers set to work with high-pressure hoses to dig tunnels under the ship in the mud, quite a task as her maximum beam exceeded 108-feet (subsequently she traversed the Panama Canal with only a foot to spare either side), and barge camels were brought alongside.

After threading chain through the tunnels dug beneath the ship and securing it to flooded barge camels either side, they began to set her free. With an exceptionally high tide in early February, the barge camels were pumped out and floated. The chain took up tight under the hull, every big tug on the Chesapeake was pulling hard, and the Missouri’s engines were in full reverse and she slowly floated free.

A board of inquiry was convened to investigate the grounding and discuss the matter of a court marshal, and if one were needed, whom it would fall on. Needless to say, the navigating officer and the officer on the con were first in line.

They ultimately relieved Captain Brown of his command and court marshaled four others following the incident. Captain Brown’s record was docked so many points that many felt it would be the end of his career. Admiral Smith, on the other hand, survived the salvage effort and went on to retire a well-respected officer.

Today, the Mighty Mo is a museum in Pearl Harbor, Hawaii, and is open to the public for tours. See ussmissouri.com for more information.

Donald Street is an internationally renowned sailor and writer, and was once a naval officer himself, serving on submarines. He has spent a lifetime at sea and has been published in nearly every major nautical magazine in the world. street-iolaire.com. 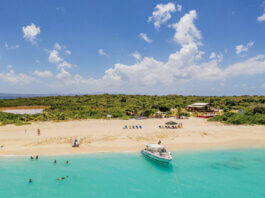 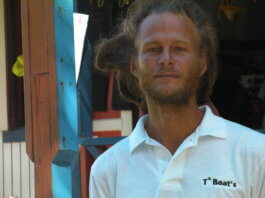 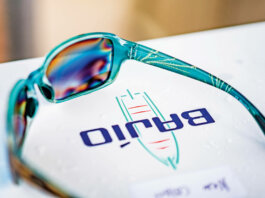